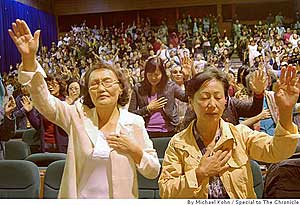 << Mongolians pray at the Living Word Christian Church, an evengelical church with around 1000 members in Ulan Bator. It is located in the UB Palace, a large complex that on weekend nights is a nightclub and bar. (By Michael Kohn / Special to The Chronicle)

For Christian missionaries like Tillman, Mongolia is the new El Dorado. Since communist rule ended in 1990, some 60,000 Mongolians have turned to Christianity, according to records kept by Mormons, Seventh-day Adventists, other Protestant churches and Catholics.

"A lot of my friends were becoming Christian, so I decided to learn something about the faith," said L. Chimgee, 18, a student at Ulan Bator's Technical University. "I went on a weekend retreat to a Christian camp in the countryside. It was a lot of fun and I felt a real sense of community. So I joined the church."

Tillman, who was acquitted of cocaine possession in 2002, believes prayers secured his freedom. Once out of jail, the Chattanooga native sold his auto body business and moved to Mongolia where his father, a Baptist pastor, had established a mission.

"As Mongolia enters a new era of freedom and democracy, people are looking for something different," said Tillman, a 53-year-old father of six, whose family includes three adopted Mongolian children. "They are looking for hope and a better life for their children. I think that Christ will give them that."

But the campaign to convert Mongolians has set off alarm bells in the ancient hallways of Gandan Monastery, the nation's largest Buddhist complex with 800 monks. Senior monk Khunhur Byambajav says he is concerned that fewer Mongolians are coming to his monastery.

"It's a problem of money. (Christian) missionaries have money to build schools and educate young people. They entice them by various means," said Byambajav, referring to gifts offered by churches such as food, clothing and scholarships to study abroad. "We cannot financially compete, but we have to try, otherwise we won't have enough young people becoming Buddhist."

Tillman's Harbor Evangelism International, for example, operates two hospitals, an orphanage, a soup kitchen and an alcohol recovery program in a country where alcoholism is rampant even among some Buddhist monks, some observers say.

"Our Mongolian Buddhist monasteries are weak," said L. Odonchimed, a former member of parliament. "They get money from people but don't give much back. Missionaries give things away for free and help people - that is what a religious organization should do."

Byambajav says he is most concerned about unregistered Christian groups, which he says indoctrinate children, convince Buddhists to burn religious articles and even destroy stupas (a mound-like structure that symbolizes enlightenment). "There is no control over these groups and no one is paying attention to what they are doing."

In a nation that separates church and state like the United States, Byambajav has asked the government to make Buddhism the state religion. He argues that the nation needs a law giving monks state funds and allowing the teaching of Buddhism in public schools.

"We sent a letter to the government to change the law on religion, but foreign religious organizations are very strong and wealthy," said Byambajav. "They influence the decisions of politicians because they give them money. So it puts us at a disadvantage."

Odonchimed, the former legislator, agrees that many Mongolians are attracted by the services offered by church groups. But he predicts they will be eventually ignored as the nation's economy develops.

"As time passes, people will have less need for these missionaries and they will be forgotten," he said. "Most people will turn back to Buddhism."

In the meantime, the Federation for the Preservation of the Mahayana Tradition, an Oregon-based nonprofit Buddhist organization, is using a Western approach to win converts. The group has opened schools in monasteries and at its center in Ulan Bator.

"Mongolian religion needs to adapt to modern times," said Ueli Minder, the Swiss head of the federation. "Young Mongolians have little knowledge of Buddhism because the monasteries don't teach the faith to laypeople. It's our goal to help people understand the roots of the culture and the religion."

Minder, however, concedes that Buddhist monks are facing a daunting challenge when going up against Christian missionaries: proselytizing is an alien concept for most of them.

"It should not become a missionary religion, but we need to have a strategy to overcome the negative propaganda of the past and the propaganda of missionary work," said Minder. "The lamas (Tibetan/Mongolian monks) need to learn to defend their beliefs ... regain the people's confidence."

Until religion was banned in 1921 by a Communist regime, most Mongolians followed Tibetan Buddhism. New freedom following the collapse of communism in 1990 legalized Buddhism and reopened monasteries. But it also opened the gates to outside faiths.

Currently, 50 percent of Mongolians are Tibetan Buddhists, 6 percent are Shamanist and Christians and 4 percent are Muslims. About 40 percent say they practice no religion, according to CIA data.

The challenge to keep the Buddhist faithful from converting to Christianity is hampered by language. Monks chant in Tibetan, which most Mongolians do not understand. Christian sermons and bibles are given and written in Mongolian.

According to records kept by church groups operating in Mongolia, there are 60,000 Christians - a 20 percent increase over the past eight years. The government keeps no statistics on religious affiliation.

In the capital, Ulan Bator, where half the nation's Christians reside, according to a U.S. State Department report, churches are located in prominent neighborhoods, including a five-story Mormon tabernacle situated next to the city's most luxurious hotel. Residents can also watch Christian programs via Eagle TV, a satellite channel funded by American Protestants.

"It's a release from the status quo," said American Baptist minister Mitch Tillman. "For so many years they were under Buddhism and then they were oppressed by communism. They want something new and they find it in Jesus Christ."