Taipei, Taiwan -- Six Tibetan Buddhist nuns from Europe and the United States were ordained in a solemn ceremony held in Taipei on Sunday and they said they will try their best to make Buddhism take root in the West. 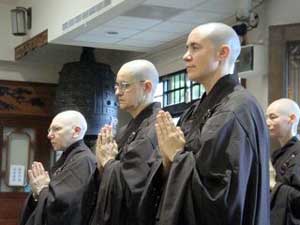 With the help of Venerable Heng-ching, the Committee of Western Bhikshunis, and Sakyadhita International, the six Buddhist monastics made their way to Taiwan to receive siksamana ordination in Yi Yuan Temple, Taipei City.

This marks the start of their second stage of a spiritual journey that requires strict discipline and determination.

Those taking siksamana ordination must spend at least two years living by the "six precepts" of no killing, no stealing, no sexual activity, no wrongful speech, no alcohol and no food outside of appointed hours. They may then be ordained at the highest level, for which there are 500 precepts.

But the Tibetan tradition does not currently ordain women to the highest level of bhikshuni. This is partly because the tradition lacks an ordination lineage for nuns, said Chang Yu-ling, chairwoman of Sakyadhita International. Sakyadhita means "Daughters of Buddha" in Sanskrit.

It may also be due to a misinterpretation of Buddhist classics, or to the long-term gender inequality prevalent in countries like India and Thailand, Chang added. Tibetan monks are not even required to undertake siksamana ordination, but may go directly from the first to highest levels, she said.

At present only Taiwan and South Korea offer full ordination to female Buddhist monastics, and that's the reason that the six nuns, four from France and two from the U.S., journeyed to Taiwan for their ordination. Chang explained.

"I was very moved and grateful, " said a 43-year-old French nun who goes by her Chinese monastic name of Chi-gwang. She has been a Buddhist monastic for the last 15 years.

She said she felt happy to be accepted as a Tibetan Buddhist siksamana, but understood the next two years are going to be tough for "one shall not kill even a mosquito."

59-year-old French nun Chan-yao said the open-hearted generosity she received from nuns in the temple was manifest at every moment and in every situation.

There are no nunneries like this in Europe, she said. "So by us taking the vows and practicing sincerely and faithfully in a such a way to inspire and create momentum, slowly Buddhism can take root in the West," she added.

Regarding the possibility for full recognition of Buddhist nuns in the Tibetan tradition, Chan-yao said there has been much effort and they had received much support and, using Buddhist terms, she added that it was just a matter of "final causes and conditions coming together."

"I certainly hope it will happen in my lifetime," she said.

The four nuns from France are disciples of Sogyal Rinpoche, a world-renowned Buddhist teacher from Tibet.