Taipei, Taiwan -- Addressing a grand prayer congregation for world peace and religious harmony held on the New Year eve in Taipei, Tibet's spiritual leader His Holiness the 14th Dalai Lama's Representative to Taiwan has underscored the importance of religious harmony among different religions of the world. 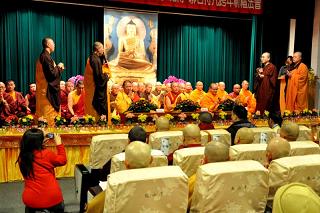 Representative Mr Dawa Tsering also spoke on the essence of His Holiness the Dalai Lama's commitment in the promotion of religious harmony and understanding among the world's major religious traditions.

The ceremony was jointly organised by Theksum choeling Tibetan Dharma Center headed by Khenpo Tsenam, Longshan Temple and Fa-Shan Temple of Taiwan under the guidance of Tibet Religious Foundation of His Holiness the Dalai Lama.

Khenpo Tsenam and other eminent Taiwanese monks spoke about the importance of maintaining good relationship among all the practitioners of Buddhism in Taiwan and to work in concert for religious harmony.

The prayer gathering was attended by over 600 people belonging to different practitioners of Buddhism, described according to the tradition followed outside of India as "Southern Buddhism", "Eastern Buddhism" and "Northern Buddhism". Monks and nuns from different Taiwanese and Tibetan Buddhist monasteries and learning centres in Taipei were also present.

"Southern Buddhism" represents Buddhism as practiced in Sri Lanka and most of Southeast Asia. It is usually considered to be synonymous with the Theravada.

"Northern Buddhism" sometimes refers to Buddhism as practiced in East Asia and the Tibetan region - particularly Tibet, China, Korea, Mongolia, Japan, and Vietnam. It is often held to by synonymous with Mahayana. However, the term Northern Buddhism is also sometimes used to refer specifically to Tibetan (including Mongolian) Buddhism. In this terminology, the Buddhism of China, Japan etc. is called Eastern Buddhism.