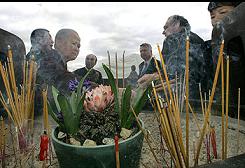 The temple is believed to be the first of its kind in an Australian cemetery.

Master Ru Sun of the Yu Yang Temple in Narre Warren guided the cemetery on the construction process and blessed the temple when it was opened.

Yesterday also marked the Hungry Ghost Ceremony, an annual event for Buddhists to celebrate ghosts being released from heaven.

Offerings of food, chants, prayers and the burning of incense were made to satisfy the ghosts and attract good fortune.

Springvale Botanical Cemetery chief executive Russ Allison said Springvale was the only cemetery in Australia to celebrate the festival.