Centre a first for Buddhists 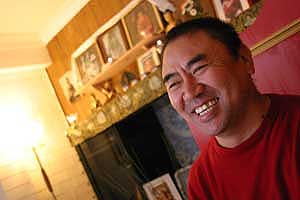 The Mollymook centre is understood to be one of only two on the NSW coast south of Wollongong. The other is in Bermagui.

Buddhists in the Milton-Ulladulla region are describing the opening as the next growth phase in Buddhism locally and say the Manjushri Centre will help them meet community needs.

It will provide a place for Buddhists to meet and meditate and to continue their teachings in the local community.

Buddhists say it was a "big step" to get to this point but hope the centre will pave the way for future expansion.

In particular, they say, a whole new generation of young people learning about meditation and the basic principles of Buddhism through local schools will have somewhere to turn in years to come.

The centre was made possible through the generosity of Mollymook resident Brett Hall, who has made a downstairs room available in his home for the centre and has also accepted responsibility for maintaining the Buddhist shrine.

Buddhist Ben Adcock said it was important for people to have somewhere to meditate - regardless of whether they were Buddhists or not - and the Manjushri centre would provide such a space.

Fortnightly meditation sessions will be held at the centre to complement classes being offered locally.

Buddhists have also identified the need for a mother's meditation group and are working towards making it happen.

Mr Adcock said it was a case of developing a centre that served the community as opposed to a centre that just local Buddhists wanted.

"We need to hear what people want and facilitate that," he said last week.

Local Buddhists believe that many local residents could benefit from Buddhist teachings and techniques without the need for them to become practising Buddhists.

Meditation sessions being offered at the centre on Tuesdays, for example, were non-Buddhist and open to everyone in the community.

Tibetan Buddhist monk, Khenpo Ngawang Dhamchoe, who visited the region over the weekend, said Buddhist philosophy had been a great contribution to society.

He said Buddhism promoted happiness and peace through meditation - or time to reflect - and the reduction of negative emotions.

If people were able to reduce their negative emotions, he said, they would become more positive and "happiness will arrive".

He said everyone was searching for a "good life" but searching, on its own, would not automatically result in a good life.

Khenpo said Buddhists were not "perfect" but all recognised that they wanted to be better people.

He said if people considered themselves perfect there would be need for them to practice Buddhism.

Khenpo described Buddhist philosophy as "mental food" for people to take and use.

Another local Buddhist, Joseph Morrissey, said the centre would provide a valuable support base. He said the centre was important in terms of offering encouragement and helping people remain committed.

Khenpo said it was important for people to feel they were part of a community rather than "by themselves" and the Mollymook centre would serve an important role in that regard.

He said humans, by nature, were social animals but modern life was "breaking down social life".

Mr Morrissey said Buddhists worked internally to produce change rather than looking at external things or other people to work for them.

Lael Evans-Morrissey said more than 150 students at primary schools in Milton and Ulladulla were currently learning about basic meditation, the life of Buddha and Buddhist teachings with an emphasis on loving kindness and calm abiding.

Mr Adcock said the Mollymook centre was linked to a centre in Canberra offering help and guidance and had "great support" from Tibetan Buddhists.

He said the small centre provided an opportunity for people to get "up close and personal" with visiting Buddhists such as Khenpo - something that Buddhists in overseas countries would find difficult to believe.

More information about the centre is available from Brett on 4455 7413.