Lhasa, Tibet (China) -- Many who visit Lhasa's famous Thousand Buddha Cliffside Sculpture on the western side of the Medicine King Mountain are usually immediately drawn to its magnificence and the utter devoutness of Tibetan Buddhist worshippers prostrating themselves over and over again on the ground. I, on the other hand, was attracted to the piles of stone plates that lay along the way up to the Mani Tower from the Cliffside Sculpture. 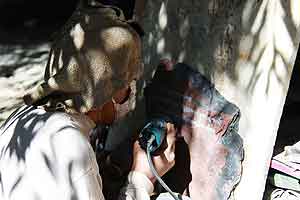 << Tashi sculpts on a piece of stone plate near the Thousand Buddha Cliffside Sculpture on Aug 21, 2011 in Lhasa, Tibet autonomous region. [Photo by Song Wei]

Those stone plates are called Mani stones, and are inscribed with the six syllable mantra Om mani padme hum (which literally means "Hail to the jewel in the lotus") as a form of prayer in Tibetan Buddhism. Piles of Mani stones make up Mani walls.

One may wonder where these Mani stones come from. My meditation was interrupted by the noise of an electric drill scratching against one of the stone plates. I turned around and saw a man with a towel covering his head and a mask on his face, totally absorbed in his sculpting.

My curiosity was raised and I could not help interrupting him.

"Excuse me", I asked politely, a bit worried the artist would be annoyed by me. He put down the electric drill, turned around, and looked me without any annoyance.

His response encouraged me to start a conversation. He was very nice, patiently listening to my questions even though I spoke word by word, fearing he wouldn't be able to fully understand, He answered slowly, with an accent, and in broken sentences.

The 38-year-old man, Tashi, started to learn the art of Mani stone sculpting when he was 24. "My Shifu (master) taught me, and I was able to do it all myself without his guidance after about one year."

Since then, stone sculpting has become major part of life. He told me he usually spends eight hours on it a day.

"Speed only comes from lots of practice and work", he said. Having already become a professional, Tashi is able to finish sculpting a 40cm long and 50cm wide stone (as the picture shows) within an hour.

However, Mani stone sculpting requires not only speed, but also precision. "It is a precise work", he said, and his eyes narrowed so I could tell he was smiling under the mask. "There should not be any mistakes, not even one on the stone", he said, his voice raised a bit, indicating his confidence in the preciseness of his work. "We believe the mistakes on Mani stones would bring bad luck to us."

Tashi went on, telling me the words inscribed on the stones now is not just Om mani padme hum, but a mantra praying for happiness and especially for one's after-life.

Some of his works will be used to create Mani walls but he told me he was also hoping to sell some of them to travelers, because he wanted his works to help people realize their prayers. Each stone plate costs 20 ($3.12) yuan to 50 ($7.82) yuan.

"But I don't make it for a living", he stressed, explaining he also had farmland. "I come here sculpting Mani stones once I have got time, for it is part of my belief and also it's been a major part of life."