Kuala Lumpur, Malaysia -- VENERABLE Ajahn Cagino, 43, lives in a cave with two snakes and eight bats. The cave is 2km from the nearest village in Mae Hong Son in northern Thailand. Nestled in a deep valley hemmed in by high mountain ranges that border Myanmar, Mae Hong Son is isolated from the outside world and is covered with mist throughout the year. 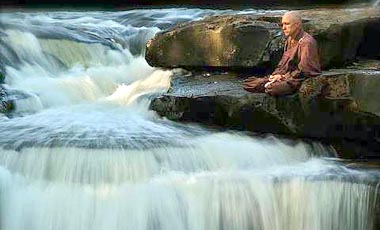 << Silence in the streams: A monk practising sitting meditation by the running waters of a waterfall.

“I’ve had enough of wandering,” says the Malaysian monk of the Thai Forest Tradition, which is a branch of Theravada Buddhism.

For 12 years, Cagino had been walking through the remotest jungles of Thailand, before settling down in a cave. It was all part of the spiritual training of a forest monk.

All those years in the forest have brought out the best in him. Cagino, who is back in Malaysia on a vassa (a three-month annual retreat observed by Theravada practitioners during the rainy season), is out to raise funds to build an orphanage in Thailand.

“When I was a forest monk, the villagers gave me food as alms. Now I want to give back to these impoverished tribal people,” says Cagino who hails from Seremban.

Cagino, a former professional photographer, found a new focus in life after he set up the Dhammagiri Foundation in Mae Hong Son in 2009. The foundation was established when local Buddhists met a group of forest monks who were passing through the village several years ago, seeking help for the tribal communities.

Cagino rang his sister, Crystal Lau, to ask for financial assistance for a few orphans. Later, when the school headmaster asked the monks to help “adopt” more orphans who were staying in the school, more individuals were recruited to sponsor a child each.

“We rented two houses – one built of bamboo and another of wood – which could accommodate only seven children. We’re planning to have a bigger place to house more orphans.”

The foundation hopes to provide financial support for 21 children, aged six to 18.

Cagino, who was an award-winning photographer, is putting up his first solo photo exhibition (as a monk) to raise funds to build an orphanage.

The sixth of seven siblings, Cagino (whose birth name is Lau Yong Fang) studied at SM Datuk Sheik Ahmad in Seremban before he graduated with a diploma in graphic design from the Malaysian Institute of Art in Kuala Lumpur.

He found work as a professional photographer, and his first job was at a bridal house. He quit after a year as he did not enjoy coaxing smiles and taking posed shots of newly-weds. Cagino became a freelance photographer and part-time lecturer, teaching students of photography clubs in schools and colleges.

He took part in various photo competitions and won over 40 prizes, including the first prize of RM10,000 in the Asian Photography competition organised by Country Heights (Kajang, Selangor) in 1990.

Despite his success, Cagino did not find happiness and fulfilment. As a photographer, he had to keep honing his skills.

“What used to be the best photo was not the best anymore. At the next photo contest, you’ve to improve your skills and get the winning shot,” he says. “Nothing seems to be the ultimate.” 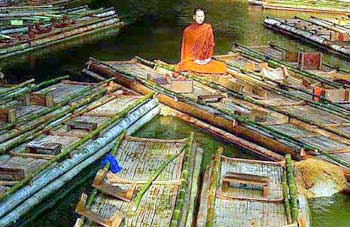 Floating to the other shore: Meditating on a bamboo raft for spiritual tranquility  >>

Cagino was miserable and disillusioned, and wondered if there was more to life than its never-ending challenges. At 27, Cagino turned his back on all material pursuits, sold off his worldly belongings, and became a monk.

Over the next two years, Cagino visited forest monasteries in Thailand and New Zealand to learn more about Buddhism.

Cagino was ordained as a samanera (novice monk) at 29, and stayed at Ang Hock Si Temple in Perak Road, Penang, for the next one-and-a-half years.

He trained as a forest monk under Thai master Ajahn Ganha for five years, and was re-ordained at Wat Pah Nanachat (The International Forest Monastery), a Buddhist monastery in north-east Thailand, in the Theravada Forest Tradition.

The monastery was established by the late Ven Ajahn Chah to provide English-speaking monks the opportunity to train and practise in the way Buddha taught his monks in the forests 2,600 years ago.

The Thai Forest Tradition stresses on meditation and strict adherence to monastic rules. Known for its orthodoxy, conservatism and asceticism, the Thais greatly respect monks who observe this tradition.

“I want to be a forest monk because Buddha himself spent much time dwelling in the forest. It is a strict, disciplined path,” says Cagino.

During the past 12 years, he was in and out of the forest with other monks. But six years ago, Cagino set off alone into the deep wilderness to experience what it was like to be a forest monk. All he had with him were five pieces of cloth, an alms bowl, cup, umbrella, mosquito net and walking stick.

“The stick is important as we can make some noise to warn snakes and other creatures of our presence when we’re walking through the forest,” says Cagino.

Cagino described his wandering years as a journey of exploration and discovery, not a time of hardship.

“I enjoyed those years even though I know not if there was a meal for tomorrow or where I was heading. I just walked on to see the world,” he says.

A forest monk leads a nomadic life as he moves from one place to another to find the ideal location to practise meditation. He usually camps by the river for easy access to water supply.

“We stay 15 days at the most at one place; not too long as we’re not supposed to feel attached to a place,” says Cagino. “If a place has ample food and shelter but is not conducive for meditation, we must leave promptly. If the place is great for meditation, the forest monk will stay a bit longer. It allows us to enhance our wisdom.” 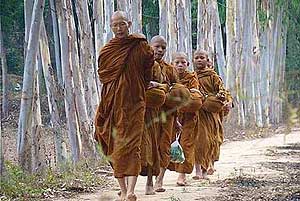 << Meal for the day: Monks returning with food offerings from their morning alms round.

Sometimes Cagino would ask villagers for directions to caves where monks had previously stayed. “There may be a fireplace and an old kettle left behind. Sometimes I will borrow a hammer and nails to make a seat for meditation,” says Cagino.

The life of a forest monk is not without its challenges. There are times when they have to track through muddy paths, cross streams and rivers, or climb down cliffs. One can easily get lost in the jungle, too.

The forest monk will usually stay 2-3km from the nearest village so that he can go for alms in the morning. He accepts only food, never money.

Once, Cagino came upon a little girl who blocked his path. He noticed she had something to give. He lowered his alms bowl and she placed a packet of rice, vegetables and a carton of milk in his bowl.

“When I was about to eat, I found a toy egg on the rice. I was touched that the little girl, out of the pureness of her heart, decided to give dana (food offering) to a monk!”