INEB paves the way for socially engaged Buddhism, which integrates the practice of Buddhism with social action for a healthy, just and peaceful world 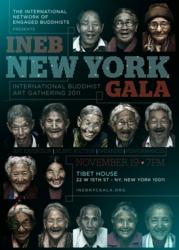 The INEB Gala offers an elegant evening of live music, cultural dance performances, and a special exhibition and silent auction of Buddhist artwork by esteemed artists from around the world, including Lowell Boyers, Songdej Thipthong, and Steven P. Perkins. Speaking at the gala are honored guests Sulak Sivaraksa, the co-founder of INEB, and American Buddhist Bernie Glassman, founder of Zen Peacemakers and Greyston Foundation. Ajahn Sulak’s latest publication, "The Wisdom of Sustainability", will be available for purchase and autograph from 8-9pm.

Tickets to the gala are $20 in advance or $25 at the door, and all proceeds from the gala and silent auction contribute to INEB social and peace-building programs in Asia.The gala silent auction is open for public, international bidding at 32Auctions, featuring original Buddhist art, exotic jewelry, and other rare finds.

In 1989, the International Network of Engaged Buddhists (INEB) was established in Siam (Thailand) by Sulak Sivaraksa, other thinkers and social activists, Buddhists and non-Buddhists. Over the years the network has expanded to include members, both individuals and organizations, from more than 20 countries across Asia, Europe, North America and Australia. From this diversity, an understanding of socially engaged Buddhism has emerged which integrates the practice of Buddhism with social action for a healthy, just and peaceful world.

INEB’s comprehensive vision is to develop the perspective and practice of socially engaged Buddhism that informs a global perspective by:

Find out more about how you can support INEB activities and purchase tickets to the INEB Gala at http://www.inebnycgala.org.