Philanthropist Robert YC Ho's gift will fund the launch of an MA for research into Buddhist culture, as the British capital prepares to host a Buddhist art forum and film festival

London, UK -- London is set to seal its status as one of the leading western centres for the study and conservation of Buddhist art, following a remarkable private donation of more than £2.5m to the Courtauld Institute of Art in London. 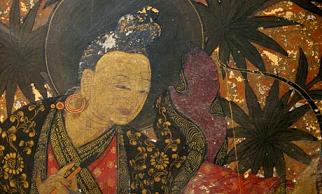 The gift comes from a devout Buddhist, Robert YC Ho, a Hong Kong benefactor who is continuing a family tradition of philanthropy that dates back to the 19th century.

The donation will allow the Courtauld to establish an endowment for a postgraduate degree devoted to Buddhist art, examining it from the points of view of religion, history and conservation.

The course will examine the vast heritage of Buddhist art, from painted cave temples along the Silk Road that linked Europe to the far east, to colossal sculptures, delicate porcelain artefacts and illuminated manuscripts.

Ho is also covering the cost of a major Buddhist art forum being staged by the Courtauld this week, which will bring together speakers from India, South Korea, China and Bhutan. Academics from around the world will be joined at the event by Matthieu Ricard, a Frenchman who is one of the world's best-known Buddhist monks.

A greater focus on non-western art has become a firm part of the Courtauld's long-term strategy. The institute's director, Professor Deborah Swallow, who is a former keeper of the V&A's Asian department and has a particular interest in Buddhist art, said the donation would allow the Courtauld to return to its pre-second world war roots.

During its first decade – the 1930s – the Courtauld included programmes in Chinese, Japanese and Indian art and archaeology. However its postwar director, Anthony Blunt, ceded responsibility for the "non-western" world to the School of Oriental and African Studies (Soas), leaving the Courtauld devoted to the western tradition.

Swallow said British universities were generally also restricting art history to western traditions. "We have felt the need to redress this imbalance… to embrace the arts of the world," she said.

The Ho donations have been made through the Robert HN Ho Family Foundation, a philanthropic organisation founded in 2005 by Ho's father, to promote Chinese culture and an understanding of Buddhism. It also supports Buddhist studies at other universities.

"Until now, Buddhism and Buddhist art and its conservation have been studied separately," said Ho. "We are delighted to support the integration of these fields in a new programme that will impact not only on academia, but on the preservation of irreplaceable treasures around the world."

There was a worldwide outcry in 2001 when the gigantic sixth-century Buddhas of the Bamyan valley in Afghanistan were dynamited by the Taliban. Other treasures have suffered decay as a result of indifference or neglect.

"For the first time," said Ho, "the conservation of Buddhist art will be the focus of academic and practical study rather than being a sideline or ignored completely." Among other themes, postgraduates will explore how far western conservation methods are appropriate to Buddhist art – for instance, some believe monastery wall paintings are too sacred to be touched by anyone but monks.

The Ho family fortune is derived from the shipping and property empire of Sir Robert Ho Tung (1862-1955), a philanthropist who gave much of his fortune to educational, cultural and medical causes. His wife, Clara Cheung, supported orphanages and homes for the blind. Their son, Ho Shai-lai, and grandson Robert HN Ho inherited the philanthropic gene and the great-grandson, Robert YC Ho, has devoted himself to cultural and medical research.

The Courtauld donation comes four years after the foundation funded its first significant museum project in the UK – a ground-breaking gallery for Buddhist sculpture, which houses an important collection in London's Victoria & Albert museum. The objects on view range from monumental Chinese temple sculptures to tiny portable gilded Buddhas.

London also boasts important Buddhist collections in the British Museum and the British Library, as well as, at Soas, the highest concentration of students of Buddhist studies at any university outside Asia. The Courtauld will collaborate with Soas on its new degree.

The Courtauld's conservation of wall painting department has recently focused research and conservation increasingly on Asia and the new programme will build on its work in China, India and Bhutan.

As the Observer reported last year, Courtauld experts have had unique access to Bhutan's hidden heritage, where many temples and objects are so remote that few westerners have ever seen them. They were astonished by the exquisite quality and technical sophistication of paintings that were largely unknown in the west.

The Courtauld experts are also working in China, teaching at Dunhuang – site of the Caves of the Thousand Buddhas – and will be taking their conservation expertise to the Indian Himalayas.

Many of these historic sites are also opening up to the west. Professor David Park of the Courtauld institute, who has been instrumental in setting up the new MA course, said: "Quite a few monasteries are building their own museums. They like tourists coming."

Bhutan, once very insular, is now opening up to outsiders.

The endowment coincides with the International Buddhist Film Festival in London this week – with films and documentaries, including one on the life of Buddha narrated by Richard Gere – and a visit to London by the Dalai Lama, who will receive the £1.1m Templeton Prize for Progress in Religion at a presentation on 14 May in a different place of worship – St Paul's Cathedral.

World Heritage Site. The world's largest complex of Buddhist wall paintings (over 45,000 sq metres) in 500 cave temples from the 4th to 14th centuries.

World Heritage Site. Begun in the 2nd century BC, the wall paintings of the Ajanta caves were hugely influential.

Dated 868, this Chinese copy of the Diamond Sutra is the world's earliest surviving dated printed book.

World Heritage Site. Capital of Japan in 8th century, the temples and shrines include the Great Buddha Hall of the Todai-ji, largest wooden building in the world with the largest bronze Buddha.