Kyoto, Japan -- The public got its first glimpse of a famous Buddhist painting on Oct. 6, when the Byodoin temple, a UNESCO World Heritage Site in Uji, Kyoto Prefecture, unveiled the "Nissokan-zu." 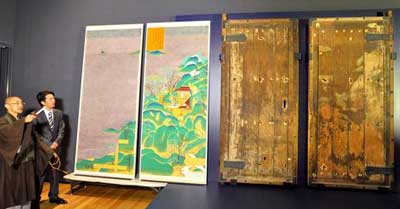 <<The original "Nissokan-zu," right, painted on two doors during the Heian Period, and a re-creation of the picture, left, are on display at Kyoto's Byodoin temple. (Kazunori Takahashi)

The painting, a national treasure, depicts a form of meditation from the Heian Period (794-1185). It will be on display at the temple's Museum Hoshokan through Dec. 14.

Since the establishment of the temple in the 11th century, only a small group of people have had access to the picture, which is painted on two door panels placed behind the Seated Amida Nyorai (Amitabha Buddha) statue, the principal Buddhist image of Byodoin temple.

The exhibition was planned following the start of major renovations of the temple's Phoenix Hall in September.

"Nissokan" is a form of ascetic training that involves contemplating heaven while facing the setting sun.

The original picture was painted on the two doors, each about 2.6 meters tall and about 1.2 meters wide. Painted on the left door is the sun setting over the sea, while on the right are mountains and a Buddhist temple.

Most of the temple's 10 paintings executed on doors--all of which are designated national treasures--were put in storage over the years due to severe deterioration, but the "Nissokan-zu" had remained in the Phoenix Hall.

The Phoenix Hall is currently closed to visitors due to construction work.