Tokyo, Japan -- The stable years of the Edo Period (1603-1868) gave rise to a prosperous merchant class and a burgeoning "townsman" culture. For that reason, Edo art is often epitomized by colorful and flamboyant ukiyo-e prints. 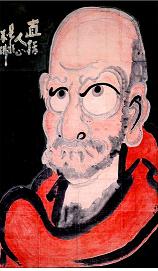 Not to be forgotten, however, are the works of Buddhist monk artists who stubbornly went their own way, choosing to work in the countryside, painting and sculpting as a means to convey the teachings of Buddha to the wider public. Though perhaps not as polished as their city-dwelling brethren, these monks imbued every brush stroke and every carving with their passion. A pair of exhibitions now running in Tokyo feature two such monks, whose "breakaway art" poses the age-old question, "What makes 'art' art?"

Hakuin Ekaku (1685–1768) was a Buddhist monk from the mid-Edo Period who possessed an almost uncanny talent. A Zen priest as well as an artist, he used his "zenga"--Zen calligraphy and paintings--as a visual tool to reach out to the public. His "One-eyed Daruma" and "Buddha," with a full head of curls, are two of the foremost examples of his robust, inspired style. His lines veer widely from his under-drawings, and his strong brush strokes seem to flow with abandon.

The general consensus is that Buddhism entered an era of decline during the Edo Period. With the Tokugawa Shogunate overseeing the administration of Buddhist temples and Shinto shrines, Buddhism came to exhibit a strong secular trend. It was during such times that Hakuin, based in a temple in Hara-shuku, in the old Suruga province (now Numazu, Shizuoka Prefecture), practiced his art to communicate Zen ideals not only to scholars and disciples, but to people of all classes.

The "HAKUIN: The Hidden Messages of Zen Art" exhibition, showing at The Bunkamura Museum of Art in Tokyo's Shibuya Ward through Feb. 24, showcases some 100 pieces of Hakuin's Zen paintings and calligraphy.

As a painter, Hakuin was something of a late-bloomer: The bulk of his existing pieces were executed after he turned 60.

His growth as an artist can be traced in his favorite subject, Daruma. Known as Bodhidharma in Sanskrit, he is the legendary Zen patriarch who traveled from India to China in the sixth century. The lines of a Daruma portrait Hakuin painted when he was 35 are fine, almost finicky, while the facial expressions of Daruma paintings from his 40s still show some hesitation.

Finally, the "Hanshin Daruma" at Manjuji temple, Oita Prefecture, which is thought to have been executed by Hakuin when he was 83, shows strong, confident lines. The wide-eyed stare expresses the depth of an all-engulfing void.

Professor Yuji Yamashita of Meiji Gakuin University, who supervised the exhibition, commented, "The Daruma can be seen almost as a self-portrait, a reflection of Hakuin himself." His studies and training as a priest seemed to have added a profound depth to his art.

According to Yamashita, as an artist, Hakuin was not considered part of the school of "suiboku-ga" (ink and wash painting)--the undisputed master of which was Sesshu Toyo--nor was he grouped with the traditional Kano school of art painters. Thus, the art of Hakuin never earned a proper pedigree and has never found a place in the history of Japanese art.

"Considering the fact that (Hakuin's work) shows no influence whatsoever from any predecessor, his art is simply 'unprecedented,' " Yamashita said.

But there is evidence that while Hakuin's work may have been unprecedented, it was not without influence of its own. There is one piece in the exhibition where Hakuin has added an inscription to a painting by the masterful Ikeno Taiga. According to Yamashita, this shows how Hakuin may have inspired great painters of 18th-century Kyoto, including Soga Shohaku and Ito Jakuchu. This is a possibility that has surfaced only in recent years.

"Hakuin apparently poured all he had, body and soul, into his art. Yet there is a certain looseness. He allows a glimpse of the 'human gesture' which makes his work so interesting."

In order to truly understand the message that Hakuin tried to express through his zenga, the viewer must take in and decipher the painting and its embedded inscription as a whole, including the meaning of the words. However, as a first step, it may be enough just to let go, appreciate the artwork and get carried away in the powerful deluge that is Hakuin.

Meanwhile, the Tokyo National Museum in Tokyo's Ueno, is showing "Enku's Buddhas: Sculptures from Senkoji Temple and the Hida Region" through April 7, spotlighting the Buddhist monk Enku (1632-1695). Born in the old Mino province (now southern Gifu Prefecture), Enku was a monk and extraordinarily prolific sculptor who continued to carve Buddhist statues throughout his life. More than 5,000 of his works still exist.

It is said that Enku began making pilgrimages in his mid-30s, and he continued with his travels for some 30 years, trekking through Hokkaido and the Kinki region, chiseling wood and giving away his Buddha statues to people he encountered. The current exhibition centers on the 61 Enku statues from Senkoji temple in Takayama, Gifu Prefecture, in addition to 39 statues from the city of Takayama.

His unostentatious Buddha statues have the texture of rough rock. There are clear chisel marks, and the surfaces are roughly hewn with a machete. The features are simple. The eyes and mouth are blunt lines. There is nothing elegant about these statues, yet they exude an overwhelming gentleness and grace that seems to embrace the onlooker.

His "Seated arhat Binzuru (Pindola)" was a "rubbing Buddha," and it is said that his "Standing Thirty-three Kannon (Avalokitesvara)" was rented out to sick patients. Enku's statues were in direct contact with the people, rooted in their daily lives.

In creating the "Standing Kongo Rikishi" (Ungyo of Nio pair), Enku carved the statue out of a tree still standing, rooted in the ground. It is a towering piece, standing more than 2 meters tall. The statue carefully retains the tree's natural form, expressing a hint of animism, a respect for the spiritual essence of natural entities.

The "Ryomen Sukuna" is a two-headed monster that is depicted in the "Nihonshoki" (Chronicles of Japan) as a scoundrel that disobeyed the Yamato dynasty and brought suffering to the people. Yet Enku's Sukuna is holding an axe, a tool used by men working in the woods, and Enku gave him a god-like look, as if he were the ancestral spirit of the mountain folk of the Hida region. His form and gentle expression is full of compassion. The statue seems to reflect Enku's way of life--to always be among the people.

"Compared to Buddha statues from the Nara Period (710-784) and the Kamakura Period (1185–1333), Enku's statues seem amateurish," according to art historian Nobuo Tsuji. "They are not 'accomplished' pieces in that sense. Yet people derive an artistic high, a pleasurable sensation from his work. Hakuin was another monk artist who broke through the existing framework of painting with his individual mode of expression. People are drawn to these two monks for their unique stance."

"Both Enku and Hakuin were able to prove the Buddhist way to enlightenment--attaining strength by letting go of worldly desires--through their artwork. That is truly an amazing feat. It may be safe to say that no artist could attain such heights through artistic training alone," Tsuji says.