The latest installation of the University of Michigan Museum of Art’s Collections Collaborations series is a spiritual journey wrapped around an exotic adventure. 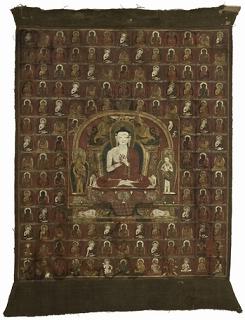 The series is co-organized by the UMMA and other U-M units to showcase the diverse collections held by that university. The latest, “Buddhist Thangkas (pronounced tong-kah) and Treasures: The Walter Koelz Collection of Himalayan Art, Museum of Anthropology” was curated by Carla M. Sinopoli, U-M professor of anthropology, curator, Museum of Anthropology, and director of the Museum Studies Program; Donald S. Lopez Jr., U-M professor of Buddhist and Tibetan studies; and Natsu Oyobe, UMMA coordinating curator and associate curator of Asian art.

It features what the UMMA calls “the rich iconography of Buddha and Buddhist deities and the colorful images (that) make thangkas fascinating objects to study.”

“In the late fall of 1932,” writes Sinopoli in her introduction to the exhibit, “U-M zoologist Walter Norman Koelz traveled to northwest India to lead a scientific expedition into the rugged Himalayan regions of Ladakh, Zanskar, Spiti, and Kunawar. Although part of India, these were the westernmost regions of the Tibetan cultural domain.

“Over the next year, Koelz journeyed many hundreds of miles by foot and on horseback over treacherous mountain passes and through fertile valleys, stopping at Buddhist monasteries and isolated mountain communities along the way. The goal of U-M’s Himalayan expedition was to create a collection of Tibetan artifacts for its Museum of Anthropology.

“As recounted in his diary, Koelz’s collecting was guided equally by his keen aesthetic sense and his stubborn determination — and by the assistance of his partner Rup Chand, a member of a highly respected Lahuli family, who provided him with entree into private homes and sacred places.”

He left with a dozen crates filled with plant and animal specimens as well as more than 600 objects of art. Some of the better parts of his labor are now wrapped around the UMMA’s well-lit second-floor A. Alfred Taubman Gallery. They’re mounted comfortably with an undeniable ethnographic spirituality in a showcase setting among other UMMA holdings of other indigenous cultures from around the world.

As the exhibit notes, without “any particular interest in Buddhism,” Koelz (with the assistance of Chand) “variously cajoled, threatened, and persuaded private (Tibetan) individuals and monks to part with their sacred and treasured objects, providing rich, if disturbing insights into the process of collecting in the region during the waning decades of British colonial rule.”

Granted, we can’t separate the time from the effort, and this is merely the historic record of the event. What’s more rewarding is the productivity of Koelz’s work. As Sinopoli relates, “Taking pride of place among (these artifacts) are spectacular thangkas, or Tibetan scroll paintings, perhaps the most well-known form of Tibetan Buddhist art.

“Additional rarely seen treasures of the exhibition include silver and brass ga’u, small boxes containing sacred texts or amulets that were carried by men and women as they travelled the rugged mountains, as well as bronze statues, jewelry, and carvings of wood and bone.”

Add additional figures of Buddha and bodhisattvas; printing blocks for making prayer flags; and molds for shaping dough offerings, and, as Sinopoli adds, “these objects speak to the rich history of western Himalayan art, early 20th century material culture, and the man who collected them.”

The thangkas serve a cosmological, theological, and social function in Tibetan culture. Depicting a Buddhist deity or serving as a mandala, these painstaking artworks are meant to reflect devotion through which both craft and function combine into an expression of personal dedication. Not only are they enlightening devotionals; they also serve as historical tools that showthe significance of Buddhism to Tibetan culture. And they’re also astoundingly sophisticated art.

As a single magnificent example (out of many) illustrates, one of the highest regarded of Koelz’s accessions, a 13th century pigment on cloth “Vairocana Buddha” (or “Celestial Buddha”) surrounded by more than 140 smaller Buddha figures from the Poo Monastery of Spiti Valley, Himachal Pradesh, India, illuminates both his intent as well as the purpose and meaning of these special artifacts.

As the UMMA’s exhibit gallery note says, “In Tibetan Buddhism there are five Buddha families, each associated with a primary Buddha, color, and direction. At the center of this thangka, the oldest in the Koelz collection, is Vairocana, who occupies the center direction and who is associated with the color white.

“The bottom row is occupied by protector deities, including the four guardian kings and the guardians of the ten directions. The specific placement of the smaller Buddhas and guardians around the central figure conform to the requirements of the Vairocana mandala (celestial palace), suggesting its power even in the absence of the conventional palace structure.”

The rest of the exhibit follows along these erudite and cultured lines. And as such, “Buddhist Thangkas and Treasures” ends up being as much a lesson in comparative religion as much as anthropology and art. It’s a spectacular array of rarely seen art and artifacts - venerated religious documents that now help create international understanding.

“Buddhist Thangkas and Treasures: The Walter Koelz Collection of Himalayan Art, Museum of Anthropology” will continue through June 9 at the University of Michigan Museum of Art, 525 S. State St. Museum hours are 11 a.m.-5 p.m. Tuesday-Saturday, and noon-5 p.m. Sunday. For information, call 734-763-UMMA.