Rosslyn, VA (USA) -- BuddhaFest, the only festival in the country to feature films, spiritual talks, meditation and live music, returns June 20-23 to Artisphere in Rosslyn, VA. BuddhaFest presents a unique blend of voices from various wisdom traditions, offering practical ways for people to live a healthy, meaningful and connected life in this increasingly complex world. 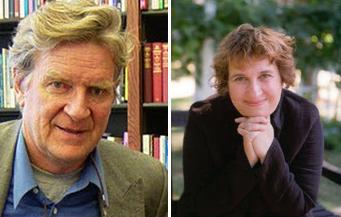 << Robert Thurman and Sharon Salzberg will be speaking at "BuddhaFest"

In its fourth annual celebration of mindfulness, meditation and compassion, this year’s festival opens to voices beyond Buddhism to include a teacher of ancient Toltec wisdom, a charismatic young yoga guru from India, and a retired Unitarian Universalist minister. These new and diverse voices will be teaching alongside popular and highly-regarded Buddhist teachers such as Robert Thurman and Sharon Salzberg.

Named one of Time magazine’s 25 most influential Americans, Buddhist scholar Robert Thurman joins New York Times best-selling author Sharon Salzberg on Saturday, June 22 for a keynote talk, “Buddhism: A Joyous Science of Kindness and Wisdom.” Thurman has written numerous books on Buddhism, Tibet, arts, culture and politics. The New York Times has called him the leading American expert on Tibetan Buddhism. He is the father of actress Uma Thurman.

New at this year’s festival is Tibet Fest, a family-friendly event on Saturday, June 22, featuring the food, dance, music and spirit of Tibet. Children are admitted free, and kids’ activities include making birthday cards to send to the Dalai Lama. Tibet Fest is inspired by Tibetan Buddhist culture and the global concern for its survival inside Tibet. It is presented in partnership with the International Campaign for Tibet and The Capital Area Tibetan Association.

Speakers at this year’s BuddhaFest are brought together by a similar approach to higher consciousness, and a commitment to the principles of mindfulness and compassion. HeatherAsh Amara, author of The Toltec Path of Transformation, shares the ancient wisdom that she learned from her mentor, The Four Agreements author don Miguel Ruiz. Anand Mehrotra is a young guru from Rishikesh, India who has created his own branch of yoga - Sattva Yoga. He appears in person with the film, THE HIGHEST PASS. Screening on Friday, June 21, the film is about a harrowing motorcycle ride that he and his students take into some of the highest areas of the Himalayas - a ride that forces them to deeply confront their fears, and better understand courage.

Former Unitarian Universalist minister Marilyn Sewell closes the festival on Sunday June 23rd as she accompanies the film, RAW FAITH. This documentary is a moving and unflinchingly honest story that traces her personal journey as she learns to care for herself as passionately as she has cared for others.

• Opening Night Film: ONE TRACK HEART -- THE STORY OF KRISHNA DAS. This film tells a compelling story of transformation as it traces the life journey of Grammy-nominated artist Krishna Das, one of the most popular kirtan musicians in the world. The film is introduced by director Jeremy Frindel and is followed by a live kirtan music performance by Gaura Vani.

• Former United Nations peacekeeper and human rights advocate Marianne Elliott, author of Zen Under Fire: Finding Peace in the Midst of War, tells a compelling story of working with yoga, meditation and compassionate action in the war-torn battlefields of Afghanistan.

• Other films include THIS DEWDROP WORLD. Jeff Goodell of Rolling Stone says, "THIS DEWDROP WORLD is a beautiful, courageous, intimate film about love and loss. It may also be the deepest meditation on climate change that I've ever seen."

See full schedule and descriptions of all films and events at: www.buddhafest.org.

BuddhaFest is dedicated to presenting events that promote spiritual awareness, compassion and peace in the world. Festival partner is Tricycle.com, a hub for groups and movements dedicated to exploring how universal Buddhist values can help to alleviate suffering, and benefit others in this increasingly interdependent, networked world. The festival’s founding sponsor is Insight Meditation Community of Washington, a group committed to deepening individual meditation practice and the growth of spiritual community.

Most speakers are available for press. We would be happy to facilitate interviews.

Festival tickets and information at: www.buddhafest.org

Free admission to Tibet Fest for children 12 and under.