Japanese Art and the Warrior Monk: Benkei, Buddhism and power of the Shinto faith

Tokyo, Japan -- Saito no Musashibo Benkei was born in 1155 and passed away in 1189. However, despite passing away relatively young he left a lasting impression which continues today in modern Japan. 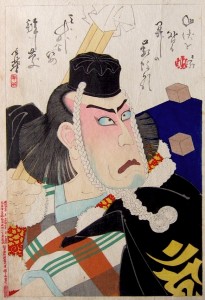 Benkei lived in a pivotal period in Japanese history because new political dynamics would impact greatly on the power mechanisms of Japan. Therefore, not surprisingly Benkei served the legendary Minamoto no Yoshitsune who impacted greatly on Japan during his lifetime.

Japanese ukiyo-e artists in the Edo and Meiji periods clearly had a very intriguing individual to focus on when it came to Benkei. After all, Benkei was famous because of his warrior skills, loyalty, remaining steadfast during difficult times and learning the way of the Yamabushi.

In this article the ukiyo-e images come from the toshidama (Toshidama Gallery) whereby this art gallery provides a wealth of knowledge about a whole array of themes related to ukiyo-e, Japanese art, culture, and the many mysteries belonging to this art form. The images highlighted show a powerful Benkei but clearly this warrior monk was also a deep thinker. Therefore, the Yamabushi lifestyle had many appeals to Benkei which is difficult to fully understand in the modern world.

Benkei is a natural hero therefore many stories within Japanese folklore are related to his prowess and binding loyalty. It is noted that Benkei was extremely tall because by the age of 17 he had reached 2.0 meters in height. Not surprisingly, ukiyo-e artists focus on his powerful stature. However, the allure of Benkei is that he also obtained great knowledge from the many Buddhist monasteries that he visited therefore he fused many powerful realities together.

Buddhism was a very powerful theme within the lifestyle of Benkei but the old ways of Shintoism also impacted on him greatly. After all, the indigenous Shinto faith altered many dynamics related to Buddhism once this philosophical way of life reached the shores of Japan. Indeed, the Yamabushi fused many areas of faith and traditions together with the upshot being new powerful concepts and a natural balance within the fabric of society.

In another article about Benkei by Modern Tokyo Times it is stated that “Much depends on the Benkei which appeals to the storyteller but within Japanese art and the tradition of ukiyo-e; it is clear that the term Oniwaka is merged within the nature of this famous warrior monk. Oniwaka means the “demon or ogre child.” Of course, many other fascinating stories evolve around Benkei including his deeds on the battlefield. For example, it is stated that he defeated at least 200 military men during major battles throughout his life. This of course may be exaggerated or it may not; yet the point is that his fame within the warrior class appealed greatly when judged with his great physical strength and the loyalty that bestowed him throughout his lifetime.”

Benkei naturally fitted in well with the lifestyle of the Yamabushi (mountain warrior monks) because he often visited Buddhist monasteries. The Yamabushi were bestowed with great supernatural powers because these mighty warriors reached a different plain based on their wisdom related to the Shugendo doctrine.

Shugendo doctrine fused the many powerful thought patterns of Shingon Buddhism, the indigenous Shinto faith, Tendai Buddhism and the potent philosophy of Taoism. Indeed, Shingon Buddhism is known for its esoteric nature and clearly this reality must have impacted greatly on the Yamabushi. Therefore, the Shugendo doctrine was a powerful way of life for the mountain warriors and reportedly this appealed greatly to Benkei.

The Toshidama Gallery states that “…he was raised by monks who were both religious and military. As a young man he positioned himself at one end of Gojo Bridge and disarmed travelers of their swords. On reaching his 999th sword he fought with a young nobleman, Minamoto no Yoshitsune, who won the battle of the bridge and thereafter Benkei served as his principal retainer. They fought in the Gempei Wars between the Taira clan and their own Minamoto clan.”

Benkei remains powerful today within Japanese folklore, the rich history of ukiyo-e which portrayed this intriguing character in Japanese history and because of modern concepts related to anime and so forth. Indeed, Benkei is a role model in many ways because of his loyalty, great wisdom and his tenaciousness.

Please visit http://toshidama-japanese-prints.com/  -   On our site you will see a wonderful selection of Japanese woodblock prints for sale. Ukiyo-e (the Japanese name for woodblock prints of the 18th and 19th centuries) are beautiful, collectible and a sound financial investment.