Silk Road secrets: The Buddhist art of the Mogao Caves

London, UK -- In a secret cave on China's ancient Silk Road, one of the world's most incredible collections of art lay locked away in darkness for 900 years. 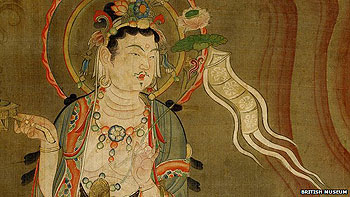 It held a treasure trove of 50,000 Buddhist paintings and manuscripts dating back to the 5th Century.

And it would have remained hidden from the world if it had not been accidentally uncovered by a curious priest - who sold it away for a fraction of its worth.

The cave is one of the 500 surviving caverns at the Mogao Caves, on the edge of the Gobi desert, at Dunhuang in western China.

Their wonders are on show in London next week as part of the V&A's new Masterpieces of Chinese Painting exhibition.

"It is incomparable to anything else," says Zhang Hongxing, the V&A's Senior Curator of Chinese Collections. "The caves are like a gallery covering 1000 years of art.

"It's the world's largest site of medieval Buddhist art, with sculptures and paintings, fine art and murals. They show how different styles and iconography progressed until the 14th Century."

Dunhuang had been a major commerce hub on the Silk Road, and a centre of religion for Buddhist monks and missionaries.

It was established as an outpost during the Han Dynasty in 111BC, with the first cave temples carved around AD350.

By the seventh century, as Silk Road trade flourished, there were more than 1000 caves decorated with magnificent statues and murals.

In 1900 Taoist priest Wang Yuanlu, acting as caretaker at the site, stumbled upon a secret cavern while attempting conservation work.

It had been walled-up in the 11th Century and was stacked floor to ceiling with the site's oldest silk manuscripts and paintings.

Why they were shut away remains a mystery, but the darkness and dry desert air had allowed them to survive. It was nicknamed the 'Library Cave'.

Culture Show presenter Kate Bryan, who visited Dunhuang for The Art of Chinese Painting, says the place still "buzzes with the excitement of what was discovered there."

"It is awesome in the truest sense of the word," she says. "Two kilometres of caves painted over a 1000 year period. It's a physical art history encyclopaedia for Chinese art.

"The Library Cave had tens of thousands of priceless manuscripts, scrolls and paintings that spanned all the great dynasties. They tell the story not just of people and politics but also of art."

Many of the paintings were commissioned by families for Buddhist funeral rituals, to earn themselves merit and secure the rebirth of their loved ones.

They often depicted images of the families themselves, so serve as a record of changing fashions in ancient China.

They also reveal the talent of the unnamed early artists, showing skilful composition and ability to capture different ages and characteristics in groups of figures.

The V&A exhibition shows how they influenced Chinese Art for centuries to come.

Bryan, who is Head of Contemporary at the Fine Art Society, says the "spatial arrangement seems years ahead of its time" in her favourite painting at the show - Court Ladies Preparing Newly Woven Silk.

"It is a beautiful work dating from around 1101-25," she adds. "It is believed to be painted by Emperor Huizong - a terrible leader but a great artist and connoisseur.

"It is extraordinary how vivid the colours are and the level of detail are."

While statues and cave murals remain at Dunhuang, Bryan says it is "poignant" that the silk paintings were removed.

When Wang Yuanlu uncovered the Library Cave, he offered the contents to local officials in the hope of receiving funds for conservation work. But they declined and told the priest to seal the treasures away again.

British-Hungarian explorer Aurel Stein heard about the discovery and met with Wang in 1907. He bought around 10,000 documents and paintings for the British Museum for £130.

French sinologist Paul Pelliot arrived soon after. His linguistic skills allowed him to identify some of the best items in the collection, which he took away for just £90.

Explorers from Russia and Japan followed, and by 1910 the Chinese government ordered the remaining silks to be transferred to Beijing. Only a fifth of them remained.

The cave's treasures are now dispersed around the world in collections in Beijing, London, Paris and Berlin.

"As a scholar, I believe they were both brilliant archaeologists, and genuinely believed in the scholarly importance of what they were doing for Chinese history.

"But as a Chinese, I feel it is China's loss if we don't provide the opportunity for this material to be studied and researched. If museums can make it available it will compensate for them being removed."

Zhang, who studied at the Nanjing Institute of Arts, says the caves remain a "Mecca for art students" today, after much of China's traditional cultural heritage was destroyed during the Mao regime.

"After the Cultural Revolution young people had a desire to find out what had been hidden away and not told.

"Art students wanted to find what traditions had been lost. At Dunhuang the murals and statues were still there, but because the silk paintings were not, they were missing out."

The caverns were made a UNESCO World Heritage site in 1987. Kate Bryan says their importance to the cultural history of China cannot be overestimated.

"The Mogao caves reveal great insight into the connectivity of the world during the age of the Silk Road, there are influences in the paintings from India, Tibet, Mongolia," she says.

"A bit like a cathedral built over centuries, you can see a multitude of styles. The caves physically show the progression of art."