Tokyo, Japan -- A unique Buddhist tapestry went on display in Kyoto starting February 8. The rare piece uses hair from people from 300 years ago, who wished to reach paradise by having their hair woven in the stitchwork. 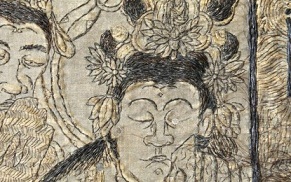 The piece is exhibited at the Kyoto district office of the Jodoshu, or “Pure land,” sect of Buddhism located in Higashiyama Ward, and can be seen from 10:00 AM to 3:00 PM daily.

It was discovered in 1997 at the Joganji temple in Kamigyo Ward in Kyoto. Featuring Buddha in a state of nirvana, the piece is measured at 170.6 centimeters in height and 84.2 centimeters in width. Stitched in 1678 by a Buddhist priest name Kunen, who travelled all over Japan during that time and asked for hair from people would be willing to give their locks in order to reach paradise after they die. Kunen sewed black hair to the fabric to represent Buddha’s own as lies on his side at the center of the piece. On the other hand, gray-colored hair was used for the withered sal tree.

Kunen’s other works, including mandalas, all used hair from more than ten thousand people, according to Kobe Gakuin University lecturer for Japanese cultural history Atsuko Hioki. She said that Kunen supposedly made 72 mandalas and nirvana stitchworks. However, only 8 still exist and the only nirvana tapestry that has been found is the one in Joganji. The use of human hair is famous in some Buddhist artwork, however, it is rare to see the whole design pattern composed only of hair and nothing else.
TOP