New York, USA -- Opening this week, and on view through May 18, Asia Society Museum's exhibition Golden Visions of Densatil: A Tibetan Buddhist Monastery is the first ever to explore the history, iconography, and exceptional artistic production associated with the central Tibetan Buddhist monastery in Densatil that was effectively destroyed during China's Cultural Revolution (1966-1978).

A collaborative effort between guest curator Dr. Olaf Czaja with Dr. Adriana Proser, John H. Foster Senior Curator of Traditional Asian Art at Asia Society, Golden Visions of Densatil brings together pieces of the monastery's memorial stupas from public and private collections in the United States and Europe to explore the spiritual journey that was laid out in their original setting.

Asia Blog reached out to Proser ahead of the opening for some background information on the Densatil Monastery and its significance within the larger culture of Tibetan Buddhism.

Why did you choose to focus on the Densatil monastery for this exhibition? What about Densatil is special or unique?

In 2012 Asia Society received the major gift of a Tibetan sculpture from our wonderful supporters Ann and Gilbert Kinney. The sculpture has the hallmarks of a piece from Densatil Monastery. This gift inspired us work on an exhibition dedicated to the monastery and the works of Buddhist art it was famed for.

What were the primary challenges to pulling an exhibition of this kind together? How long did the process take? 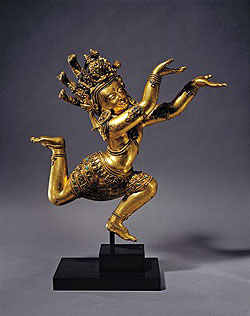 Densatil Monastery was constructed in the late 12th century by followers of Phagmo Drupa Dorje Gyalpo (1110-1170). Between 1270s and the 1430s eight spectacular stupas, each around ten feet high, were constructed in Densatil’s main hall to house remains and relics of Densatil abbots. These rare gilt copper stupas inlaid with semi-precious stones were a particular type called tashi gomang stupa. They were regarded as among the most spectacular and beautiful works to be found in Tibet's many religious structures.

The first thing I did once we had decided in 2012 to do this exhibition was find an expert to collaborate with. Through doing research and talking to colleagues in the art world, I learned of the German scholar Olaf Czaja and his work on the Phagmo Drupa school of Tibetan Buddhism and Densatil Monastery. It is only because Olaf had already accomplished so much groundwork on Densatil and tashi gomang fragments that we were able to fast-track the exhibition and pull an exhibition and catalogue together in two years. Olaf had identified many of the fragments of tashi gomang in public and private collections as well as pieces that had passed through auction houses and particular dealers. The next step, which was quite challenging in some cases, was tracking down the private collectors who now had these pieces and convincing them that this was an important exhibition to lend to.

Until how recently was the Densatil monastery intact? What is known about its destruction?

Despite major conflicts and even bloody battles between warring schools of Tibetan Buddhists between the 13th through 19th centuries, Densatil survived intact. It was not until the Chinese Cultural Revolution that the monastery, including the tashi gomang, was destroyed. The destruction of the monastery was not documented and precisely what happened remains for historians to recover or reconstruct.

What stands at the Densatil monastery site today? 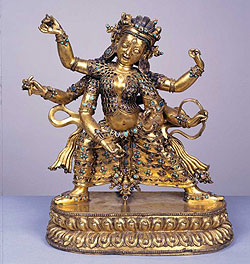 Starting in the late 1990s, new halls and temples began to be built on the site of the destroyed monastery. In 2010, a new main hall was constructed. Reconstruction is continuing under the auspices of the Tibet Autonomous Region Ministry of Culture and the Drigung (Drikung) Kagyu school.

How will the items be displayed at Asia Society Museum?

We are displaying the works in the exhibition so that our visitors get a sense of what they would see when they walked around a tashi gomang stupa, viewing the various tiers of the stupa from bottom to top. In this way viewers also get a sense of the higher and higher levels of deities that are encountered as a Tibetan Buddhist adherent travels on the road to enlightenment. We have incorporated a series of curved walls into the exhibition design to enhance this experience. There will be just under 50 works in the exhibition.

What's the one thing that surprised you the most during your time working on this exhibition?

The excitement that word of the show is generating among fans of Tibetan art. I knew this would be an important show, but I am delighted that there is so much anticipation.