London, UK -- When tinkerers take apart electronic gadgets, it’s usually to see how they work. When Leonardo Ulian disassembles the guts of an old computer, however, the surgery is more philosophical than it is technical. 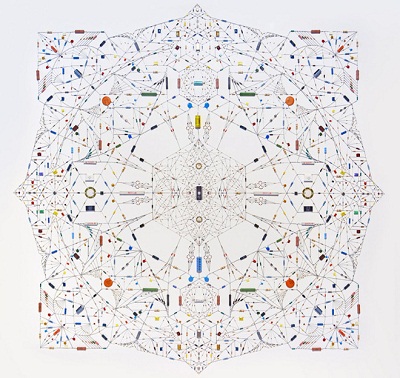 London-based artist Leonardo Ulian's pieces are made of
hundreds and hundreds of tiny computer parts.

To draw more attention to the circuitry that powers our day-to-day lives, Ulian creates these low-relief works of art out of hundreds of tiny computer components that he finds or buys online (he’s a fan of Russia’s eBay) and solders together. They are a juxtaposition: His material of choice is cold and technical, but the patterns he creates with them are more ‘kumbaya’ than ‘computational,’ given that they’re thematically centered around the human mind and spirit.

For example: In 2012 he began the Mandala series. Ulian’s pieces don’t neatly adhere to the geometric tradition of mandala diagrams (“It’s got super-strict rules,” he says), and are more improvisational, with symmetrical patterns radiating outward from a center. The Hindu and Buddhist religions use mandala charts during meditation, or for decoration in a holy space. Tibetan Buddhists will make them out of colored sand, and ceremoniously destroy them later—which is why Ulian compares his pieces to mandalas. “In a way technology is kind of ephemeral. It’s always evolving, you’re always looking for a new phone or a new computer, so it’s like mandala. They extinguish, and they can’t be permanent,” Ulian says.

His newer pieces are a reflection on the human mind versus the mind of a computer. Instead of microscopic, perfectly even blueprints, the Microchip Synapse series is a collection of maze-like abstractions of how the brain works. “We’re living in a moment where electronics are really pushing the boundaries of how we perceive reality,” Ulian says. “Without microchips nothing would work anymore.” Perhaps, as the implication goes, even our own brains.