A New Kind of Buddhist Altar for a Changing Japan

Tokyo, Japan -- Traditional Buddhist prayer altars are a breathtaking sight. The shrines range in size and ornamentation, but some of the most elaborate ones are spectacles of gold, painted wood, and statuettes that act as a focal point for prayer and meditation. 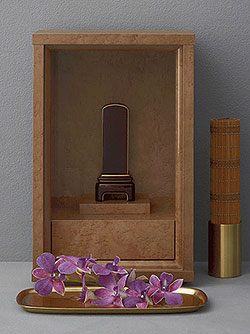 In Japan, Buddhism frequently caters to funeral prayer. Even though a majority of Japanese people more or less claim agnosticism, ceremonies surrounding deaths have long been Buddhist ones, held in Buddhist temples and homes. These days, for a number of reasons, that tradition is endangered. Younger generations living in cities not only have different value systems than their rural grandparents, they have much, much smaller apartments. (Remember the $500-and-up a month “coffin” apartments in Tokyo?) Which means no room for altars.

Japanese designer Keita Suzuki wants to make it easier for city dwellers to hang on to Buddhist mourning rituals, so he’s recently rolled out Shinobu, a line of slick, shoe box-sized altars that would look right at home on Muji’s store shelves. Suzuki has updated the altars to match what are probably modern, minimalist homes. The tools—incense, candles, the singing bowl used during chanting—come in neutral metals and have basic cylindrical shapes. And instead of doors that swing open, the altars have bamboo blinds that don’t take up an inch of extra air space.

Numbers show that Buddhism is on the decline in Japan. The countryside still has thousands of temples, but membership is way down, meaning they might not survive. But in 2011, after an earthquake triggered a tsunami on the country’s northeast coast, Suzuki traveled to the area and visited survivors. Hundreds died in the disaster, and Suzuki noticed that even in temporary housing people had erected small altars to mourn the deceased. In times of tragedy, it would appear the tradition is not yet lost.