Tibetan Buddhist symbols and their religious and spiritual significance

New Delhi, India -- Every religion has some simple visual symbols to represent itself and convey its essence. There are eight Tibetan Buddhist symbols representing the essence of the religion. Often, these symbols are used as wall painting or floor paintings on the occasion of religious festivals on ceremonies. 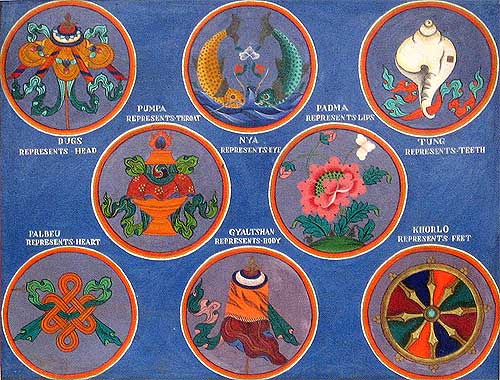 The eight symbols of Tibetan Buddhism that are drawn on the house walls like mandanas on the eve of Losar - the Tibetan New Year - are said to be auspicious and keep the evil spirits away. Therefore, the drawing these religious symbols of Buddhism on special occasions is considered good omen.

From time to time, various Buddhist symbolic innovations were introduced but they got formalized as eight symbols called Ashtamangala or eight auspicious symbols as domestic and public art on religious occasions with esoteric meaning, religious connotations and life values. However, the Ashtamangala symbols spread with Buddhism to the art of many cultures and countries, including Indian, Tibetan, Nepalese, and Chinese art.