Prague, Czech Republic -- An exhibition called Afghanistan: Rescued Treasures of Buddhism organized by the National Museum aims to present the war-torn country in a different light, to draw attention to its rich cultural history and point out the many influences that left their mark on Afghan culture and traditions. 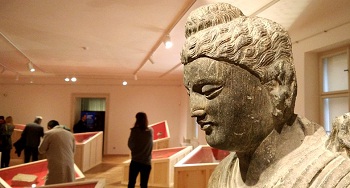 The exhibition focuses on the country’s pre-Islamic Buddhist period. Its chief organizer Lubomír Novák showed me around and began by explaining what makes the exhibition so special.

Not many people around the world know that Afghanistan is not just an Islamic country but that it has a rich Buddhist history which reaches to the so-called Kushan period which started approximately in the 1st century AD. So in this respect the exhibition is really amazing and we are happy that here in Prague we can present this unknown part of the history of a country that is known as a country of war.

Where were these artefacts found and how were they preserved?

“The majority of artefacts presented at the exhibition are from a site called Mes’ Aynak located some 40 kilometers eastward from Kabul. The site is specific because it was one of the crossroads on the Silk Road, there was a mining agglomeration, several Buddhist monasteries, a fort and probably also a Zoroastrian shrine. So it is our aim to present this site which is really amazing and will probably be destroyed due to the fact that it lies on a large copper deposit, probably the largest in the world.”

Were the artefacts hidden in order to protect them from being destroyed?

“They were hidden and nowadays they are preserved in the depositories of the National Museum of Afghanistan in Kabul.”

And have they been restored? What condition were they found in?

And the Afghan side agreed with that?

“Yes, the agreement was that the Czech Museum would get the exhibition for free and in return we would restore all the artefacts for the Afghan Museum.”

Can we take a turn around the exhibition now and can you point out some of the interesting pieces you have on display?

“Certainly. The first artefact you see here is a statue of Buddha, the so-called Miracle of Sravasti which is connected with the revealing of the teaching of Dharma, which was revealed in the city of Sravasti in present-day India and from this point started the teaching of so-called Mahayana Buddhism, the main Buddhist school which is known world-wide. So this statue is the “welcome” artefact of the exhibition and it tries to show the historical context of all the artefacts displayed here.” The greatest number of artefacts on display are jewelry, and also some pottery which shows the common aspect of the life of people in pre-Islamic Afghanistan. We have on display here two fragments of text written in the Bactrian language, which is now a dead language of northern Afghanistan, related to Pashto one of the official languages of Afghanistan and what is amazing is that these texts are written in an Iranian dialect but they are written in Greek script adopted for this dialect. Now the Bactrian language is preserved from the 2nd to the 8th century AD when the Greek culture was already dead in a way but its influence was still present in Afghanistan and the script is proof that the Greeks never died out culturally in Afghanistan.”

“In another glass case we have specimen of several coins from Afghanistan and we wanted to show people the continuity from the Greek period so the first displayed coin is that of Alexander the Great -that’s four to five hundred years before the main focus of the exhibition - and them we continue with Kushan and Sasanian coins in order to show the chronology of rules in Afghanistan in that period. ”

“Yes, the second hall presents the site of Mes’Aynak and here we have a reconstruction of a Mes’Aynak house. Inside visitors can see two large storage jars that served to store food and water.”

“Approximately. It is a model of what a Mes’Aynak house may have looked like.”

And it was made of wood?

“No, they were made of Adobe bricks.”

“Yes, the third room of the exhibition begins with Buddhism in Afghanistan. In the centre of the room there is a wooden model of a stupa, one of the Buddhist religious structures which was used to store important relics belonging to the Buddha and sacred texts, and people walked around stupas clockwise so we arranged the exhibit so that people here also perform this small Buddhist ritual and walk around the stupa clockwise. Around there are Buddhist statues and some other items. For example the first two displayed artefacts are a Buddhist alter and painting both of them depicting Buddha in the dhyana mudra position on a lotus flower –so the same thing in a different artistic presentation. ”

This Buddha’s eyes have been scratched out…

“Yes, on this painting we can clearly see what happened to Buddhist art after the coming of Islam. Sunni Islam forbids the depiction of human beings which is different compared to Buddhism so they censored the art as we can see here. Eyes were scratched out or else they were painted black. They preserved the painting but censored it in a way so that it would not contradict the Sunny doctrine of Islam. So Islam did not destroy all the previous art but it modified it according to its teaching.”

“Yes, they are Buddha statuettes and many of them show the Indian origin of Buddhism and Buddhist art but an aware visitor may see that Greek influences are visible on many of the statues.”

“Yes, because in the Kushan period Afghanistan was a melting pot of the Greek influence which came with Alexander and remained there during the Hellenistic period and it mixed with nomadic influences after the coming of nomadic tribes which were the main ethnic group from which the Kushan dynasty formed and it melted with the influence from India so the Kushan period in Afghanistan was really a multi-cultural empire that shows influences from various parts of the world from Persia, from India, from China from central/Asian parts of the Silk Road so it was really an amazing place and the Kushan period is considered to be the Golden Age in the history of Afghanistan.”

And you can see these influences in the way the Buddhas are sitting or standing?

“Not just in that but in the whole artistic presentation in clothing, profile etc. It is really hard to explain, people need to see it for themselves, to compare the statues and try to detect the Greek influence.”

And what have we here?

“This is one of the biggest artefacts on display - the head of Buddha made of clay. It is very heavy and it was very difficult to transport it from Kabul National Museum to Prague. The face shows clear Indian influence and it has a very peaceful expression so it is tempting to lower yourself a little in order to look into Buddha’s eyes and find a bit of peace here at the exhibition.”

And how has the public responded? How much interest has the exhibition generated?

“As far as I know in the first three weeks of the exhibition we had more than 4,000 visitors which is a great audience and we did not expect it. We are really happy about the interest and I think it may also be due to the fact that people do not know very much about Afghanistan. So we are happy that we could show Afghanistan in a different light so that people may learn that Afghanistan is not just “Talibanistan” but it is also a country with a large and rich cultural tradition.”

The exhibition is on display at the Náprstek Museum of Asian, African and American Cultures. For more information go to: