Getting the gist of Gautama

HYDERABAD, India -- Gutama Buddha’s teachings have come alive in Hyderabad, thanks to   a group show at Also 8 Art Gallery in the city. Kappari Kishan, popular for his paintings with a  touch of Telangana culture,  is  also displaying his paintings on the enlightened one. 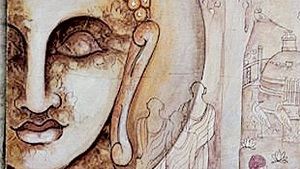 The show which is on till May 31 began on the occasion of Buddha Purnima earlier this  month.

The show comprises over 90 paintings of Buddha  by 45 artists. Two on plywood are the highlights of the show.

Among the participating artists  this year are Sivanand, Siddharth, Raja, Udayshankar, Gurucharan, and Manish Varma.

The paintings depict His philsophy and Ambedkar’s  ideology of equality and equanimity, says Kishan.

He  informed that several city artists are working towards  depicting Moghul and Indian styles of art in future  shows. “We have been celebrating Buddha Purnima for the last seven  years in the city through art shows. Kishan had his works displayed in Athens Art Fest in  Greece in April in a group show of international  artists in April this year.
TOP