Ladakh, India -- Hundreds of thousands of monks, devotees and tourists have flocked to India’s remote Ladakh region for a rare Buddhist festival, dubbed the “Kumbh Mela of the Himalayas” by promoters. 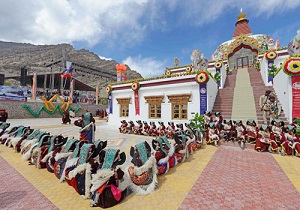 << The Naropa Festival is held high in the Himalayas. Photos: AFP

Dancers in bright, silk costumes and striking headgear performed to drum and pipe music as part of the festival being held in a mountain village to commemorate the 1000th birth anniversary of Buddhist saint Naropa.

The Indian saint and scholar is heralded by followers for starting a rich tradition of Buddhist philosophy in the 11th century.

Celebrated only once every 12 years, the Naropa Festival draws huge numbers of Buddhists, especially those from the Drukpa branch which is traditionally practised in Ladakh and Bhutan.

Among those in the crowd in Hemis village for the week-long festival was award-winning Chinese-Malaysian actress Michelle Yeoh.

India is renowned for its numerous religious festivals – including the main Kumbh Mela pilgrimage for Hindus held every 12 years – during which masses of devotees gather at sacred rivers and temples in often chaotic scenes and in searing temperatures.

In contrast, the Naropa Festival is being held in the tranquil Himalayan village that includes a palace and monastery, located some 45 kilometres (28 miles) from the region’s main town of Leh.

A highlight of the week-long festival that started on September 16 was the display of the sacred Six Bone Ornaments – believed to have belonged to Naropa – in an hours-long outdoor ceremony.

The Drukpa spiritual leader or the Gyalwang Drukpa unveiled the ornaments – which include a crown, earrings and a necklace – to scores of chanting maroon-robed monks and devotees seated under colourful umbrellas as prayers were performed.

“I come from south India. Now I came here to see this festival ... There are many people [who] came by airplane and from south India and other countries,” said Sonam Phuntsok, a monk from India’s southern city of Bangalore.

Another highlight is the ceremonial unfurling of a huge silk tapestry of Tibet’s patron saint Padmasambhava. The brocade, known in Tibetan as a thangka, was last exhibited in 2004.
TOP