Aurangabad, India -- This story is as much about Indian history of Buddhism as it is of a will and perseverance of an artist; whose relentless efforts will be revered by generations to come. 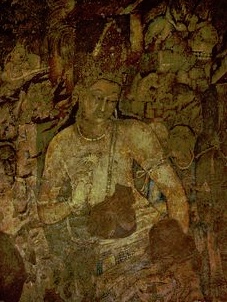 Everyone knows about the great caves of Ajanta in Aurangabad district of Maharashtra. Millions of tourists come here every year from all corners of planet to see the gigantic caves in rocky mountains as well as minutely detailed Budhist paintings dating back centuries.

Its a fact that historic monuments and UNESCO’s historic site such as Ajanta is in dilapidated state; even continuous efforts by government aren’t enough.

In this situation one artist devoted his life and took the mantle of recreating these painting single handily. Its been half century that his work began hours and hours of observation inside caves throughout the year, huge canvases, collecting unique colors to match the originals needed herculean effort!

But now when we look at the paintings it gives us moments of pride and achievement.

How can someone love these historic treasures so much that he devoted his whole life for it?

What is the reason that gave him patience?

What was his driving force behind taking up this effort?

What was that incredible process he went through?

How intricate his thought process was?

The name of this artist is M R Pimpare. The following are a summary of facts and figures of his amazing feat to restore the cave paintings.