The artists need cold fingers and plenty of patience.

Tibet, China -- In many cultures, sculpted butter is an artistic medium, whether as a banquet-hall spectacle or an exhibit at the county fair. But for Tibetan Buddhist monks and laity, artistic butter designs, known as torma or tsepdro, take on a spiritual role. 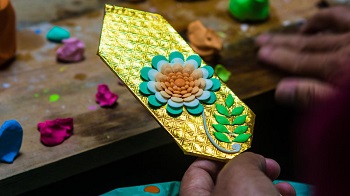 << Colored butter is molded onto placards.
All photos courtesy of YoWangdu Experience Tibet

Traditionally made using yak butter mixed with barley flour and coloring, the symbols are either formed on flat boards or made into freestanding sculptures. Since butter is both soft and meltable, makers need delicate hands and cold rooms. They also soak their hands in icy water to keep meltage to a minimum.

Often, the sculptures are made for Losar, the Tibetan New Year’s festival, as well as prayer festivals. The custom may date back to the life of the Buddha himself, says Yeshe Wangmo, writer and producer of the film Torma: The Ancient Art of Tibetan Butter Sculpture. “The word tor means to throw or to scatter,” she says. “The suffix -ma means mother in Tibetan, which means love.”

Different lineages of Tibetan Buddhism have different styles of tormas, but many use similar symbolism. Images of the Eight Auspicious Symbols, such as a white conch shell and the dharma wheel, are common. So are flowers and animals. The animals tend to be birds, rabbits, monkeys, or elephants, or the Four Harmonious Friends, the characters of a legend emphasizing cooperation and respect for one’s elders.

Monks often offer completed tormas to deities and spirits. “You want make offerings of the things that appeal to the senses,” Yeshe says. Many of the stories detailing the origins of tormas state that they were developed as a way to offer flowers in the middle of winter, when there was no vegetation but plenty of butter. Other times, tormas can represent deities themselves. The art form is a serious business—it’s important to make the works as beautiful as possible.

If it’s not too hot or humid, even butter tormas can last for several weeks. But eventually the edible creations are left for birds, animals, and even sometimes people. (Yeshe says they can be quite delicious.) The painstaking act of making these temporary creations is meant to develop generosity in the makers.

While butter sculpture has been practiced for centuries, the Chinese occupation of Tibet in 1950 meant an end to many monastic practices: Residents fled the country, and the Cultural Revolution closed monasteries and prohibited religious activities. But “under the watchful eye of the government,” Yeshe says, Buddhist practice is once again permitted in parts of the country. Butter art has “developed outside of Tibet,” Yeshe says, and “even in Tibet, there are monasteries allowed to teach these arts again.”

Different lineages and communities in the Tibetan Buddhist diaspora use different coloring agents, ingredients, and designs, which are set down in illustrated manuals. In India, wax and pastry margarine help tormas hold up in hotter weather, whereas at Yeshe’s Buddhist retreat center in upstate New York, they incorporate easier-to-find oatmeal instead of barley flour. Yeshe says that the definition of tormas is malleable, and that they can be made of different materials or to serve different purposes. Sometimes, they’re made of clay, or even gold.

When the ingredients are melting butter, though, cold rooms and ice water are necessary. Some makers of tormas can even get frostbite. That discomfort, along with the long, laborious process of shaping something so temporary, can be painful. Yet part of seeking enlightenment means developing wisdom and accumulating merits through good actions. “You’re experiencing discomfort and difficulty in making this offering,” says Yeshe. “And there’s merit that comes from that.”
TOP