Kathmandu, Nepal -- Nepal, a country blessed by nature, also enjoys world renown for its art and architecture from the classical period. As a good source of income, Thanka paintings have a long history. 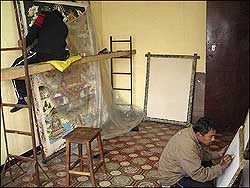 During the lifetime of the Buddha and for many years after his passing this genre was not practiced. Then, individuals and communities gradually began to realize his teachings, and, to give them artistic expression, started this form of scroll-painting. Moreover, one can say that thankas can be regarded as Buddhist religious paintings. thankas are also used as visual support for meditation practice. Buddhist art has its origins in the empire of Asoka in the third century BCE.

The word "thanka" is believed to have come from the Tibetan word "thang yig," meaning a written record. thanka artists use a range of colors and fine brushes to make the paintings look realistic. The painting itself illustrates incidents from the life of the Buddha and the message he wanted to deliver to the world. thankas are painted mainly on silk or cotton, using a variety of colors and shades. 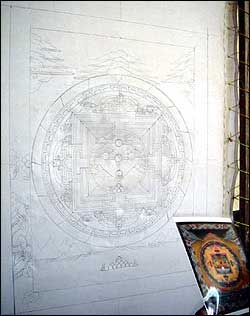 According to the techniques and materials used, thankas are grouped in different categories. thankas are masterfully hand-painted by Nepali and Tibetan artists. Lamas view thankas as objects of religious importance and devotion, as aids to spiritual practice, conferring blessings on meditators.

The name "Dalai Lama" underscores the importance of thankas. The Dalai Lama is the spiritual leader of Tibetan Buddhism and was formerly the ruler of Tibet, believed to be the reincarnation of the Buddha. It is held that, in reincarnating, his soul would enter the body of a new-born boy, who, after being identified by traditional tests, would turn out to be a new Dalai Lama. One of the world- renowned thankas named Kalchakra Mandala is said to have been designed by the Dalai Lama, and is accordingly referred to as the Dalai Lama Mandala thanka.

Kalchakra is Sanskrit for the "Wheel of time," which can also be translated as "Cycle of time." Perhaps the most admired and discussed symbol of Buddhist religion and art is the Mandala, a term which, like guru and yoga, has become part of the English language. The word "mandala" itself is derived from the root "manda," meaning essence, to which the suffix "la," meaning container, has been added. Thus, one obvious connotation of mandala is that it is a container of essence. As an image, a mandala may symbolize both the mind and the body of the Buddha. In esoteric Buddhism the principle embodied by the mandala is the presence of the Buddha in it; but images of deities are not necessary. They may be presented either as a wheel, a tree, or a jewel, or in any other form. 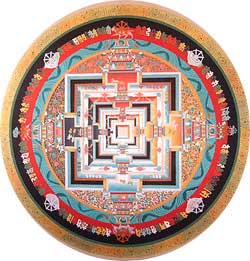 thanka painting is practiced in Nepal mainly by those living below subsistence level. One of the artists, Bishnu Lama, who has a shop in the tourist center of Kathmandu, called "Thamel," said:"Practicing thanka is easy and does not require a good education. It is as easy as reading books. One can easily learn just by looking and practicing the work. Though it needs great concentration and perfect coordination, it is very easy to learn." In addition he said that "the government has shown no interest in this field, though it can provide good support for the country's economy." Referring to the government he also said that "proper management should be arranged for training thanka painters."

Buyers from the U.S., Japan, China, England, Germany and France have shown the most interest in this type of painting. The paintings are valued from US$40 to US$2,000. The shelf life for a thanka varies from three months to five years, according to the type of paintings and the materials used.