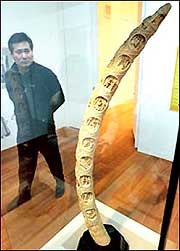 << A gallery visitor observes the life story of Buddha depicted in roundels carved into this ivory tusk at the Korea Foundation Cultural Center on Tuesday.
/Korea Times Photo by Kim Hyun-tae

The exhibition of ``Buddhist Art of India: Exhibition from the National Museum, New Dehli’’ was launched with the ambitious hope that it would enhance understanding of the historical and religious affinities India and Korea share.

Organizers at the opening ceremony emphasized what they described as a common cultural bond between Korea and India through the religion of Buddhism.

About 20 foreign ambassadors were invited, and some 100 foreign and Korean diplomats and other dignitaries were on hand at the opening ceremony, complete with TV cameras, Indian hors d'oeuvres and strong sweet tea.

``The deep connection the two countries have is evidenced by the marriage of princess of Ayodhya, Ok Huh-hwang and the prince of Kaya,’’ Doctor Raghuraj Singh Chauhan, director of exhibitions at the Indian National Museum, said in his congratulatory remarks. 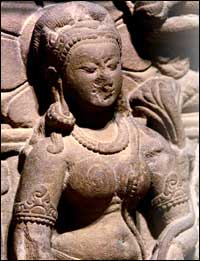 The exhibition of over 50 items covers 2,500 years of Buddhist iconography, but in the more than 10 years of cross-cultural fertilization, it marks the first ever presentation of Indian Buddhist art here.

Buddhist images important in India are important in Korea, too, images of the Buddha himself for one. Images of Boddhisattivas, bird or animal guardian figures, plants, signs of the zodiac are other examples of cross-cultural fertilization planted by the spread of the religion.

``Historically, active exchanges have influenced Korea through Buddhism and Koreans are nowadays more interested in India. So, I am sure the exhibition will be warmly received,’’ Kwon In-hyuk, president of the Korea Foundation, said.

``While economics and politics are important, cultural relations are equally important,’’ he said. ``Culture underlies the bond between peoples. Exhibitions like this one will enhance the bond that is growing fast.’’

Director of the Korea Foundation Cultural Center Yoon Keum-jin was pleased albeit relieved that it turned out as well as it did. ``It was really hard work,’’ she said, but seemed confident it would contribute to the Indian president’s upcoming visit.

``The Buddha promoted peace and understanding between people and, (the President) is promoting peace and enhancing understanding through his visit to Korea,’’ Parthasarathi said. ``He is a scientist and a cultured person. And he believes in the philosophy of the Buddha.’’

After welcoming and congratulatory speeches and attending dignitaries performed a Buddhist ceremony to launch the exhibition, Kwon guided a throng of ambassadors, dignitaries and journalists through the exhibit.

The two countries continued contact by monks traveling between India and Korea. The routes of Korean monks to Nalanda, Amaravati and Sankisa and Indian monks to the Koguryo, Paekche and unified Shilla kingdoms maintained the cultural communication, he said in the tour.

``Buddhism has meaning for us today,’’ Parthasarathi said. ``It teaches the virtue of silence in communication. If we listen more, that would contribute much to better communication,’’ he added.