Buddha's story cleverly lets puppets be the figures of speech

St. Paul, Minneapolis (USA) -- Of all the ways to tell a story, why have religion and politics and theater used puppets across the centuries? 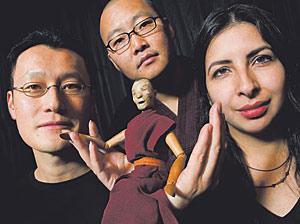 For Andrew Kim, the answer is simple:

"It shortcuts through the intellectual part of your brain and taps into pure emotions," he said. "We're allowed to be more surreal and spiritual, but we're allowed to get away with it because it looks cool and beautiful."

Kim is directing "Gotama: A Journey to the Buddha," the new show at In the Heart of the Beast Puppet and Mask Theatre. It's a homecoming for the 37-year-old artist: Kim was for years a performer and company member with Heart of the Beast before moving to Seattle in 2000 as part of an odyssey that took him around the world studying puppetry arts and theater.

He has returned to work with designer Masanari Kawahara to re-create the ancient story of a young prince named Siddhatta Gotama, who leaves his life of sheltered comfort to see the world. Witnessing the poor, the old and the dying for the first time, he's moved to give up his material belongings. In search of his own humanity, he becomes the Buddha.

It's an iconic story but perhaps not a well-known one to Western audiences unfamiliar with the central figure of the Buddhist faith. Looking for a way to tell the tale clearly, Kim turned to Aditi Kapil, a local actress, director and writer to fashion a script.

Though it seems like a common-sense decision, it was slightly unusual in the world of puppet theater, which, said Kim, "is first and foremost a visual form."

"They normally don't have scripts, at least not written by playwrights," Kapil concurred. "They have stuff that gets created along the way as text, and then someone writes it down and they stick close to it … or not.

"But," Kapil continued, "Andy and Masa, when they first conceived of this, decided that they wanted the words to be as strong as the puppetry, as opposed to having the words as an afterthought."

The collaboration has turned into something of an odyssey itself. Kapil's first draft of the script was a scant 13 pages, essentially a series of monologues for a minor character named Channa, the charioteer and companion of the prince. But as the work developed, Channa's role grew, eventually becoming the character through whose eyes the story is told.

"I think we're on Draft Nine or something like that by now," Kim said with a laugh. "A real benefit of working with Aditi is that, since her primary work has been as an actor, she knows how the process can change. She's been really generous about writing and rewriting and collaborating."

Kapil wasn't even flustered when, a couple of weeks back, Kim and Kawahara called for a wholesale change in the script. The creative team was working against hard deadlines — the looming prospect of opening night and the due date of Kapil's second child.

The result, Kapil said, is a script that "will be a fusion of puppetry and traditional theater. All of these performers have to be skilled puppeteers but also pure theatrical actors. It's quite a task."

Kim hopes the result will draw audiences both into the play and the world of puppetry.

"This play asks you to suspend your belief in gravity and the realities of the world," he said. "All theater does that, but puppetry asks the audience to come even a step further into our world."

What: "Gotama: A Journey to the Buddha"