Buddha comes to the Galilee

Tel Aviv, Israel -- Few words are necessary to describe a viewer's emotional reaction when confronted by the bronze, sandstone and wooden figures and heads of Buddha currently on view at the Wilfrid Israel Museum in Kibbutz Hazorea. 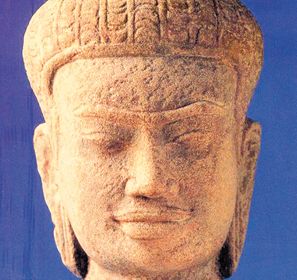 All from the museum's permanent collection, these softly modeled, expressive works project a calm meditative state of mind as they support an exhibition entitled "Awakening" - a diverse group of selected works by contemporary Israeli artists.

A beautifully carved wheat-colored sandstone Buddha from Cambodia's Khmer period at the end of the 12th century greets visitors at the museum's entrance hall, followed by more than a dozen or more impeccably sculpted revelations from Nepal, China, Thailand, India, Tibet and Burma dating from the 2nd to the 18th century.

Included in the display of contemporary works are understated examples of Zen in the form of monotypes by Pamela Silver. "Ten Stages between Life and Death" are an amalgamation of overlapping gray rectangles highlighted by a linear white element that spurts across the surfaces in "The Connection" or swirls endlessly in "Eternity."

Judy Gor's "Breathing Light" installation includes a large shallow tub of transient contemplative illumination placed alongside a video presentation of the sea and horizon at various times of day by Ayelet Zohar. Figurative canvases by David Leviathan and Itamar Newman are displayed alongside mural-sized landscape photographs, some leaning toward the romantic, by Dafna Kaplan and Tal Gluck.

The exhibition will be on view until May 1.