Boulder, Colorado (USA) -- Ronald Bernier will present his final public lecture at the University of Colorado at Boulder as a professor of art history when he discusses "Hidden Buddhist Arts in Burma, Ladakh and Tibet" on Monday, March 20. 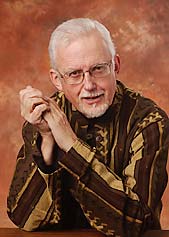 Bernier, a CU-Boulder faculty member since 1971, will retire following the spring semester, but will give special seminars occasionally. He is a widely known Asian art history scholar and has led study tours in Tibet, Burma, Nepal, Vietnam, India, Sri Lanka and other Asian countries.

During the talk, Bernier will show photographs of and discuss little known Buddhist arts he viewed in Burma, Tibet and Ladakh, a district of India, over the past several years. Some of the arts were unknown until the Dalai Lama recently urged that they be shared, according to Bernier. His photographs include monasteries, altars, murals and colossal Buddhist figures, many of which date to the 11th century.

"These arts are endangered, many of the monasteries I visited are in a state of collapse," Bernier said. "The most positive thing is that Ladakh is a surviving Buddhist culture, where I found monasteries that are still functional and whole. Their art has not really decayed. In fact, the freshness of thousand-year-old paintings is amazing."

Bernier also will teach a three-credit graduate course in art history slated to begin in January 2007. It will be held partially in Boulder, followed by six days of intensive study in New York. An informational session on the seminar in "Art of Tibet and the Himalaya" will be held on Wednesday, March 22, at 4 p.m. in Sibelle Wolle Fine Arts room N193. The seminar is co-sponsored by the CU-Boulder art and art history department and the Division of Continuing Education.