SEOUL, South Korea -- The performance of a Buddhist dance ritual in the heart of the Korean Catholic Church added a new dimension to interreligious understanding and dialogue between the two communities. 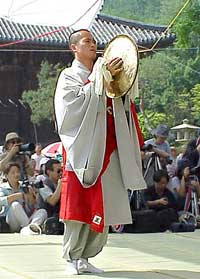 << Bara or the "cymbal dance" is part of the Yeongsanjae ritual

Pyeonghwa Broadcasting Corporation (PBC), the cable TV station run by Seoul Archdiocese, invited Buddhists to perform the Yeongsanjae ritual at Coste Hall in the Myongdong Cathedral compound on April 19. The performance was part of a mostly musical program for an audience of about 200 Buddhists and Catholics.

It marked the first time that Myongdong Cathedral has held such a Buddhist ritual in its compound, according to the cathedral office. Program producer Michael Sung Suk-ho told UCA News the Yeongsanjae was arranged for the occasion of Vesak, the holiday commemorating Buddha's birth. This year Korean Buddhists will celebrate Vesak on May 5.

"Buddhists and Catholics have exchanged congratulatory messages on the occasions of Vesak, Easter and Christmas in recent years. I hope this will be another chance to acknowledge and understand other religions," Sung said. According to the producer, the idea of presenting the Buddhist ritual drew good support from senior PBC staff. The cable station plans to broadcast the performance April 30-May 3.

Yeongsanjae, a local tradition, re-enacts Buddha's teaching of the Lotus Sutra some 2,600 years ago. Commonly performed with the intention of easing the passage of the dead into paradise, the ritual has been designated an Intangible Cultural Asset by the government, the 50th such designation.

Venerable Daewoong, former head monk of Bongwonsa Temple in Seoul, said at the performance that Yeongsanjae shows the essence of Buddhist culture, so it is called the "flower of Buddhist ritual." Bongwonsa Temple has been designated as preserver and transmitter of this national cultural asset.

Father John Choi Ho-young, church music professor at Catholic University of Korea, underlined the significant of the performance at Myongdong Cathedral as an interreligious exchange.

"Korean Buddhism has a long history and Yeongsanjae encapsulates Buddhist culture. By experiencing the Buddhist ritual, Catholics can understand more about not only Buddhism but Korean culture," the priest told UCA News.

He added his hope that the church would have the chance to reciprocate. "It would be great if we could perform Gregorian chant at a Buddhist concert, he said. Father Choi studied organ music and Gregorian chant in Germany.

Venerable Unbong, who performed at the cathedral, told UCA News he was very pleased to show Buddhist culture to Catholics. The opportunity arose "thanks to the Catholic Church's open-mindedness," he said.

"It should not be a one-time event," continued the monk, who is secretary of Bongwonsa Temple. "I hope this kind of event will continue and be held regularly to deepen understanding of each other. I'll urge the Buddhist cable TV to invite a Catholic team in return."

Venerable Myoungkyu, a Buddhist nun also of Bongwonsa Temple, also praised the Catholic Church for its effort at interreligious dialogue.

A lay Buddhist devotee from the temple, Hwang Jeong-sook, told UCA News at the cathedral event: "It's good to see harmony among religions. Witnessing the effort for interreligious peace, I feel real peace in my mind."

A Catholic in the audience, Agapis Woo Nam-hee, admitted she is not familiar with Buddhist culture but said watching the performance was "meaningful."