The zen of photography

A N.Y. show where real time turns out to be the most surreal of all

NEW YORK, USA -- Every day, hundreds of tourists snap photographs of a crowd- and car-jammed Times Square. The average picture takes - what? - 15 seconds to shoot? 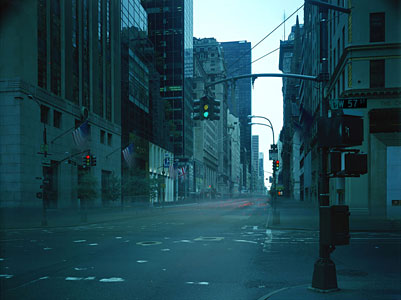 The same picture of the same place takes the Korean photographer Atta Kim eight hours. And his Times Square ends up with only an eerie trace of a human presence, like a deserted movie set.

Other pictures by Kim, who is making an outstanding New York solo debut in a show titled “Atta Kim: On-Air” at the International Center of Photography, have required less time.

A photograph of a soccer game: two hours. Still others go way beyond the eight-hour mark. “Monologue of Ice,” with its mysterious lozenge of pollen-yellow light hovering in the dark, is the product of a marathon 25-hour shoot.

And what is that picture of? A block of ice melting. Kim put the ice in a room and left the lens of his camera open to record the process of physical change as a solid form returned to fluid. Naturally, the transformation was slow. But who would have guessed that it would be so spectacularly photogenic — molten-looking and radiant?

Many of the large-format photographs in Kim’s show were made over time. His is an art of duration and of simultaneity. When he leaves his lens open for an hour on a couple making love, every movement made in that hour is in the picture, though condensed into an explosive blur.

His view of Times Square leaves all the stationary elements — buildings and such — in crisp focus, but reduces traffic to a shimmering haze, a ghost of motion. Other famous New York intersections get the same treatment.

This technique is old. Early-19th-century pioneers of photography experimented with it. So do contemporary artists like Hiroshi Sugimoto, in his well-known shots of movie-house interiors taken while full-length films are in progress. What Kim brings to the tradition are new subjects — live-model Buddhist sculptures, for example — and dramatically extended temporal parameters, to create ever more complex compressions and layerings of time.

He has similarly pushed the boundaries in his extreme elaboration of a second traditional method of image-layering, one associated with double or multiple exposures. In several series of pictures Kim overlays different, semitransparent pictures of human figures, one on top of another, using digital editing. He piles up anywhere from a dozen to a hundred separate images to create a single composite picture, at once singular and multiple.

But while digitally savvy, Kim’s work is more distinctive for its ideas than for its technology. Born in South Korea in 1956, he earned a degree in mechanical engineering, but his interests were, and still are, literature and philosophy. He considers Heidegger’s speculations on time an important early influence, along with the teachings of the mystic G.I. Gurdjieff (which also shaped the work of the American photographer Minor White). Most important of all is Zen Buddhist thinking, although this thread has been fully apparent only in the last few years.

And although Kim is careful to assert that he is not a practicing Buddhist, core Buddhist concepts shape the new work. One is the notion that change, or transience, is the only concrete reality, and that time as a quantifiable, linear entity is a mirage. All time and no time are the same. A couple making love for an hour is a cloud of luminosity.

Then there is the Buddhist belief in cosmic interconnection, that all things are linked to, are part of, all other things. In a series titled “Self-Portrait” Kim layers head shots of 100 Korean men to create one “Korean” face.

In a studio-made re-enactment of Leonardo’s “Last Supper,” the figures of 13 different models, each holding the appropriate pose, are combined to form the 13 figures in the scene. Thus, by implication, Jesus is also Judas.

Again, Kim’s use of such photographic techniques is not in itself novel, but the philosophical shape of his work is. And it is clearest in his most straightforward pictures. His “Portrait of Mao” (2006) series involves no layering or time compression, but consists of a sequence of still shots. In the first we see a lifelike bust of the Chinese leader carved in ice. In the second the bust has grown abstract through melting. In the third it is as smooth, attenuated and abstract as a Brancusi sculpture.

And in a similar series, “Portrait of Atta,” not in the New York show, the artist records his own features carved in ice undergoing a similar transformation. The sequence is a perfect, step-by-step Buddhist image of time passing and an ego disappearing, a process that some of Kim’s other recent pictures turn into mandalas of layered light.