The Enlightened One: Buddhist Art in the Israel Museum Collection

Some pieces seen for the first time

Jerusalem, Israel -- "The Enlightened One" collection of Buddhist art at the Israel Museum presents sculptures, paintings, scriptures and relics spanning 2,500 years and originating from several countries of the Far East. The museum's website says "the works on display range from the earliest representations of Buddha and his attendants in India to later forms developed in China and Japan. 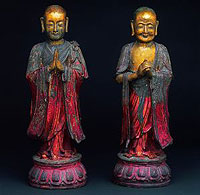 << Buddhist Monks: The gilt and lacquered bronze sculpture of the monks Kashyapa and Ananda show a high level of craftsmanship attained in 16th century China. (Courtesy of the Israel Museum)

Along with the various Buddhas, deities, and sages, Tibetan ritual objects are also on display. Together, the works—some of which are shown to the public for the first time—convey the many facets of Buddhist art, its multiple meanings, and its visual richness."

Buddhism didn't have one form. During the years, it went through many changes, split into various sections, absorbed and was assimilated by the local culture and religious system of the places where it was spread. Buddhist arts similarly experienced various changes. But in spite of the differences and variety, the items in the exhibit share many things in common.

Buddha Sakyamuni (literally, "the wise one from the clan of the Sakya") was born to a ruling family and, as Prince Gautama Siddhartha, lived a life of comfort and pleasure. When exposed to the suffering and tribulations of human existence, he decided to abandon his royal life and pursue answers to some of life's perplexing questions: Why was man doomed to suffer? How can one escape suffering? After six years of wandering, he sat down and mediated under a bodhi tree until he enlightened to the eternal truth of the universe.

Since Sakyamuni's departure from the earth by way of nirvana, other Buddhas and Bodhisattvas joined the pantheon of Buddhist belief. They had their own characteristics and specific existence. For example, Bodhisattva Avalokitesvara became known as the goddess of mercy and is especially honored in Tibet. The Buddha of Healing is regarded as one who watches over physicians.

For the believer, a sculpture of the Buddha is not merely an artistic item, but an object that carries with it a spark of the divine being it represents. It is the image of the god, and the presence of this god in this object gives it holiness.

Buddhist religious art wasn't meant to provide an aesthetic experience for the beholder. Rather, the sacred image was meant to offer a spiritual solace and to protect those who honored and respected the artwork. Buddhist artwork represents a kind of ritual object, that is, an aid in one's spiritual journey to the Truth.

The exhibition at the Israel Museum opens a window to another culture, with its mystery and sacredness. Explanations and descriptions of each object help the observer to understand sacred symbols and how they relate to the mundane world.