What The Buddha Saw

Beautiful moving on the path to self-awareness

New York, USA -- It takes guts to face down a big, bare room alone like Brendan McCall did in his self-produced show at Danspace Project, presenting a nearly seamless suite of solos for close to an hour. 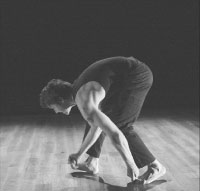 << In “Original Face” Brendan McCall tranforms into a beached seal, a beetle flipped on its back, and a monkey pacing in its cage. - steven schreiber

Striking good looks helped, as did fluent dancing too and—in the initial stages of his evening—the kind of mysterious emotional containment that makes people want to lean forward and figure out who’s really in there. The roughly 50-minute piece - “Dances, Stories, and the Winedark Sea”—appears to record an increasingly disruptive process in which McCall himself has figured out who’s in there; that is, if one assumes figuring out is ever finished.

The suite contains new material as well as excerpts from older works such as “Almost Rapture”—a 1997 group piece made with Paul Langland. This opener, set to Faure’s “Requiem,” establishes a baseline that demonstrates what makes McCall worth watching—he moves beautifully. Although he has one foot in today—other musical choices include Green Day, Radiohead, and Joy Division rubbing shoulders with Satie and Dvorak—he dances with an old-school, thoughtful concern about composition, refined sculpting, and timing.

In the “Almost Rapture” excerpt, he’s a model of serene, limpid confidence, striding forward, wriggling his shoulders, and playing in and out of balance at an unhurried pace. I had a passing thought that I might like to see this danced on ice. Green Day’s “Boulevard of Broken Dreams” elicits something similar but with more pep and some involvement of his hips and pelvis. He shoves his hands in the pockets of his dark costume, lightly bouncing on his heels, like a young stud trying to look sassy. But that’s a vanishing moment, like so many others; McCall doesn’t grasp images very long, just long enough to hit the viewer in a particular way.

As the suite progresses, McCall shifts gears. Some floorwork from the 2002 “Human Behaviors” gives way to jerky, thrusting moves (set to Joy Divisions’s “Digital”), followed by a predictably quieter segment (to the Satie piece) and unpredictable thrashing (to Gary Jules’s “Mad World.”) Soon McCall is climbing the sanctuary steps, standing under the fake structure of its Greek arch, and futilely pushing against the pristine wall. He backs away, turns, and walks out of the space as the lights go down for a brief, collage-like film by Alexandra Brodsky.

The next section’s aural accompaniment is a recording of McCall reading his text—a stream of reflections on quantum mechanics, genocide, and prison conditions in Soviet-ruled Lithuania, Barbara Bush’s lack of empathy for Katrina survivors, the training of baby elephants, and the similar conditioning of his own limiting habits of thought, and all those things that spiritual masters tell us do not answer the perennial question “Who am I?” This list of startling juxtapositions certainly seems forced and excessive; as the recording began I was prepared to resist. But McCall’s bright skills in writing and speaking voice—he has a respectable background in theater—compelled me to surrender and float along with his flowing, twisting ideas.

In the end work, “Original Face” (2002), McCall transforms the human look of his body in a series of images evoking the struggles of a beached seal, a beetle flipped upon its back, and a monkey ceaselessly pacing its cage. If this is the “I” beneath all the illusory, distracting selves of a man, of humanity, of earthly existence or what we have made of it, then McCall has unmasked the original, suffering face that the Buddha saw.