Budapest, Hungary -- The art of Hungarian Buddhist SI-LA-GI exhibit is open to Radford University Nov. 15 through Dec. 6 at the RU Art Museum on East Main Street, Radford, according to the International Education Center. The exhibit portrays various works of Buddhism culture on canvases and in photographs and film. 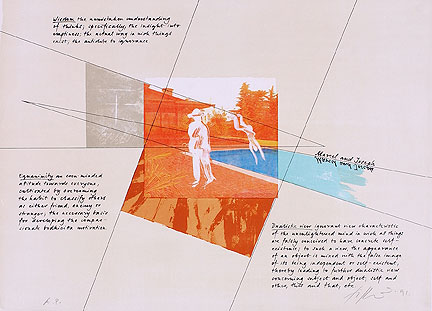 Dr. Preston Thayer, director of the museum, is in charge of all material that enters the museum.

“I became acquainted with his work while attending an international art exhibit in Venice, Italy, last year, and we invited [SI-LA-GI] to exhibit with us,” Thayer said.

“His work creates tension between western art and eastern philosophy,” Thayer said. “Western art always has content (tells a story), whereas Buddhist philosophy teaches that spiritual success is obtained only by emptying oneself of content.”

Any kind of art form, whether it is painting or sculptures, can be a form of therapy or stress-reliever.

“From a Buddhist meditation point of view, artistic creation has no significance,” said SI-LA-GI. “On the other hand, art is a kind of meditation for me.”

There are two pieces of film at the exhibit. One, entitled Empty Sky portrays three men standing in a hole resembling a grave. The film begins with one man. The man is then joined by two other men at different times during the film. The films are projected from the ceiling onto a rectangular screen placed on the ground, forcing the audience to look down while watching it. The artist requested that it be set up this way.

“He did not want this film projected against the wall like the other,” Thayer said. “He asked to have it specifically on the floor.”

While the men repetitively make similar actions throughout the film, they stand in the hole as they raise their hands toward the sky and appear to be shouting, but there is no sound; Empty Sky is a silent film.

“They seem to be complaining and railing against their misfortunes,” Thayer said. “If you didn't get a response, you might think it was an empty sky.”

In addition to his work with film, SI-LA-GI is also involved in photography.

A photograph entitled “Tower of Silence, Hanging Garden” depicts a moving Zoroastrian religious ritual performed in India. This ritual is based on the person’s soul after death, not the actual body. In Zoroastrianism, it is believed that on the fourth day after death, the soul leaves the body. The body is then considered an empty shell and left in a dokhma, or Tower of Silence. The photograph shows a large, circular, opened-top area where skeletal remains lay.

“The task of a work of art is to emanate positive energy; to pull down walls; in certain cases to create firm spiritual foundations in others,” SI-LA-GI said.

“Heart Sutra” is a 49-by-63-inch photograph that hangs on the right wall of the exhibit and is the last piece of his work shown in the exhibit. The Heart Sutra, a main Buddhist text, states that there is nothing that lies outside the five aggregates of human existence, which are form, feeling, volition, perception and consciousness.

“It’s almost as if he is so totally enmeshed in the philosophy that he became part of it,” Thayer said.

The exhibit also holds a variety of different works done on paper. Marcel + Joseph 1 is done with light, paint, crayon, acrylic and spray. There are Buddhist words of wisdom, dualistic view and equanimity written on the canvas.

“We try to create a mix of art,” Thayer said. “I think we’ve had a strong response overall.”

In all, the exhibit holds three works on paper, two videos and six photographs. SI-LA-GI urges people to get a better understanding and appreciation of art by simply visiting the exhibit to experience something new.

“A list of exhibitions does not help understanding or appreciating art. One should seek references in one’s own consciousness,” SI-LA-GI said.