Pleasure in a small pot

Orange County, CA (USA) -- Bill Motta will tell you that a bonsai plant is like a person. Each has its own needs, quirks and personality, the Newport Beach resident said. Motta is a longtime member of the Garden Grove-based Orange County Bonsai Society, which a group of gardeners formed in 1964. 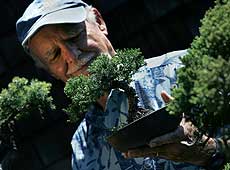 The group's 44th annual Bonsai Show this weekend at the Orange County Buddhist Church in Anaheim will feature demonstrations, sales and plant giveaways for enthusiasts of this Japanese art form.

The show grew from members' desire to share their knowledge of and enthusiasm for bonsai, Motta said.

"It's not just gardening," he said. "There is a lot of technique to bonsai."

"Bonsai" means "potted plant" in Japanese and is a popular art form in China and Korea as well. The plants can be developed from seeds, cuttings or young trees and range in height from 2 inches to about 3 feet. To keep bonsai specimens small, gardeners prune branches and roots, periodically repot them, pinch off new growth and wire the branches and trunk so they grow into the desired shape.

For those who are curious about the ancient horticultural art form, this weekend's show affords an opportunity "to see gardening and art come together," said Kenneth Schlothan, the group's president.

"It offers a different sense of beauty of what plants can do and how they can change over time," he said. "Just watching the plants grow and change gives me great satisfaction."

It's almost a Zen-like bliss, a rare and precious "one-on-one" activity that's hard to find these days, Schlothan said.

Schlothan has more than 200 plants in his Anaheim home, and Motta owns more than 80.

It takes a lot for a plant to be shown in public, Motta said. Some of his bonsai specimens are more than 40 years old. There's one that grew from a little stem he plucked off a giant pine tree in front of his house. Then there's a stray weed from his yard, which he shaped into beautiful little tree.

Among Motta's creations are trees such as juniper and pine as well as fruit trees such as pomegranate and flowering plants such as bougainvillea. He is not a big fan of the figurines and ornaments widely seen in stores.

"These are extraneous objects that take away from the beauty and value of the plant itself," he says.

More than anything else, buying a ready-made plant defeats the purpose of bonsai, Motta said.

"You lose out on the experience of doing something with your hands and watch it grow and change," he said. "That's what it's all about."