Beijing, China -- The Tibetan prostration is a ritual in Tibetan Buddhism. Palms put together, Tibetans prostrate themselves on the ground, with the head, arms, and knees down on the ground, and move forward slowly, following every step with a prostration. 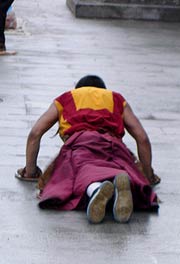 This is the way to express their most honest hearts to the Buddha, as they walk from their hometown to Lhasa. During the long journey, they wear wooden kneepads to protect their knees and fur to ward off dust on their faces, and prostration every three steps until they arrive in Lhasa.

A prostration rule is strictly practiced by Tibetans.

For the third step, they move their palms to the front of their breast, and, as they stride forward, make their arms parallel to the ground with the centers of their palms facing the earth.

Finally, they fall on their knees, lie down on the ground, touch it with their forehead, and then stand up and do it again. While doing the prostration, they are supposed to patter the Six Words Sutra without stopping.