Seoul, South Korea -- For many people, burning incense is seen as a religious ritual, as depicted throughout history. However, incense is widely used in various fields and has many social roles, regardless of race or region. 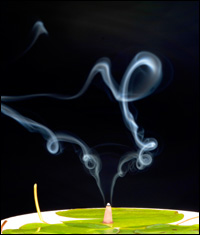 << Burning incense has been widely used in various fields and has many social roles throughout history.

It was originally associated only with religious activities, but over time, it has developed gradually into everyday culture around the world.

Incense materials and their smoke have been adopted in medicine and emerged as a culture of aesthetic appreciation, which has facilitated even greater ubiquity for incense burning.

To show various aspects of incense and aromas, the Coreana Cosmetics Museum is holding an exhibition titled ``Hyang, the Experience of Incense.''

The exhibition displays 30 pieces of incense-related items, as used through Korean history.

The exhibition is designed to show incense not only through the sense of smell but through all five senses, raising awareness of the traditional fragrance and reviving it as a traditional aroma culture.

Incense was used in religious ceremonies in Korea, presumably going back to ancient times, according to the museum.

During the Three Kingdoms (57 B.C.-A.D. 668) Korean traditional aroma culture developed with the introduction of Buddhism.

Silla people used to carry aromatic plant bags in their pockets regardless of their social hierarchy.

Also, on the tomb murals of the Goguryeo era, people are painted along with the depiction of incense burners.

The custom of incense burning continued throughout the Goryeo Kingdom (918 - 1392) and was carried out by the royal family, aristocratic women as well as ordinary people.

Incense was widely used as varieties of aromatic substances were imported through increased trade with foreign countries. 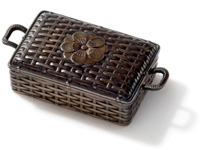 Korean Empire Incense Case with a plum blossom design, made with silver from the late 19th century.
/ Courtesy of Coreana Cosmetic Museum  >>

Nevertheless, aroma culture decreased under the influence of Confucianism in the Joseon Kingdom (1392 - 1910). But it did not die as it had already become part of daily life.

For example, in the royal court, expert artisans called ``hyangjang'' dealt with aromatic substances, while ordinary women made incense for themselves.

Also, scholars burnt incense as it helped them concentrate on their studies.

There are various aromas Koreans have enjoyed in the past.

White sandalwood is the fragrant wood of trees that grows naturally in India, Malaysia, and Australia. Its gentle, sweet smell is persistent, aids relaxation and calms the nerves.

Dried clove buds were used as a spice all over the world due to their unique fragrance. It is said when held in the mouth cloves help rid bad breath.

Musk comes from the glands of the male musk deer, inhabiting mountainous areas of Central Asia. Its ammoniac smell is intense but exudes a pleasant odor when diluted. It was widely used for its appealing scent, purportedly helping to allure the opposite sex, thus usually used in bedrooms among couples and also women in the court.

Agarwood is a large deciduous tree native to India and Southeast Asia. It produces an aromatic resin that when burnt has an intense scent. Agarwood has been valued by many cultures for its distinctive fragrance.

In addition to the introduction of these aromas, various items at the exhibition such as a blue and white porcelain lidded perfume vessel, a perfumed oil bottle with a stamped design and an ornamental fragrance pendant are on display.

``There are increasing opportunities to look back to our traditional beauties through Hwang Jin-I (a high-profile female entertainer in the 16th century). But we haven't had a chance to look back on our invisible beauty _ traditional aroma,'' Yoo Seung-hee, vice director of the museum, said.

``I hope the exhibition will shed new light on incense as part of our culture and keep it afloat,'' Yoo said.

The exhibition will continue through Dec. 29.