New York, USA -- Electrocuting Pope Benedict's cross-emblazoned loafers will likely earn you an express ticket to hell. But the Dalai Lama? Charge up his shoes and he gently smirks. Experimenting with the Kirlian life force, artist Sylvie Fleury passed high-voltage current through a slightly worn pair of Dexters donated by Tenzin Gyatso, the 14th DL, then snapped a photo of the fiery corona. Told of the result, the man called Kundun just laughed, suggesting that since the shoes had been resoled several times, their aura might actually belong to the cobbler. 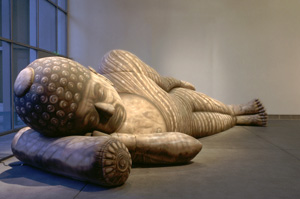 << The sleep of the awakened: Paranirvana, Lewis Desoto's blow-up Buddha (1999)
photo: The Rubin Museum of Art

Part of a traveling exhibit that interprets the Dalai Lama—at the Rubin Museum of Art and the School of Visual Arts—the plain shoes, the photo, and the cheeky response sum up this grab-bag collection from over 80 contributors: a mix of wit, wacky reverence, and that unaffected style of the man himself. Take Chuck Close's photograph, for example. Shot in a hotel room, and flattened by a short focus and a muted palette, the portrait is as spare and direct as a monk—but playful. Filling the frame, the Dalai Lama stares out with tinted glasses, shrewd eyes, and a knowing grin. Sure, he's a spiritual leader, Tibet's exiled head of state, a winner of the Nobel Peace Prize, and a reincarnation—but if not for the red robe, he's a character actor in a head shot, advertising a comedian's sensibility. Buddhism has probably never had a more appealing front man.

Which could explain why a number of the artists followed Pop Art urges. In a 20-panel cartoon that might have come from Mad Magazine's Don Martin, painter Guy Buffet depicts the Dalai Lama (the likeness is poor, but no matter) frantically swatting at a troublesome bee before finally turning it into a lotus blossom. In the Rubin's lobby, Lewis deSoto's 25-foot-long blow-up Buddha achieves nirvana from an air compressor, like a solemn street-fair balloon promoting enlightenment. Over at SVA, there's a refined, urban version of upstate chainsaw sculpture: Long-Bin Chen has expressed Oneness by carving the head of Buddha, an animal, and a knobby-nosed human from a spiraling stack of Manhattan phone books. Native Iranian Seyed Alavi captures other beliefs in the style of black-on-yellow road signs, cleverly manipulating the familiar figures into contemplative moments; two lean toward each other and share a circular head, for example, while another gains its inner self from falling rain.

The exhibit's more pensive works can sometimes appear too devout, like fawning, overzealous groupies. Dario Campanile paints wonderfully in the Renaissance style, but his symbolism on Tibetan independence—a dove breaking free of a chain—is heavy-handed. Likewise, Bill Viola, who once studied with a Zen master, goes starry-eyed in videos that show a man and woman getting their chakras slowly probed by bright lights; the Haight- Ashbury pipe dream feels a little dated.

The best of the serious art follows Buddhism's tenet of stripping away the extraneous. In stark black-and-white photographs by Tri Huu Luu, the backs of nuns' and monks' shaven heads become pristine, silvery orbs—visions of mysticism. Kisho Mukaiyama achieves a similar beauty of reduction with his exquisite mandalas, painted in diffuse shades of color on blocks of wax. And refreshing the conceptualism of the ubiquitous debris pile, Dove Bradshaw (a John Cage devotee) has hung a slowly dripping glass funnel filled with water over a cone of Himalayan salt. An elegant visual balance and a concise metaphor for time, death, man vs. nature, or just about anything else, it works as a kind of universal mantra.

Not all is so calm, though. The team of Robert and Shana ParkeHarrison, known for their tableaux vivants, have photographed an invented ritual about earthly connections—a man's hand, wearing a contraption that draws his blood into a stylus, traces a coagulating red line across snow. At SVA, Ryuichi Sakamoto's composition for piano and singing bowls plays through speakers that vibrate sand into patterns (mimicking a Tibetan tradition). Described as peaceful, the music happily isn't, sounding more like the ominous soundtrack from a Tarkovsky flick; it lends a mood of strangeness to everything here.

At the Rubin, where a central stairwell projects noises from below, other works that rely on sound don't fare as well. Even though Laurie Anderson's "fake hologram" is visually arresting—small clay models seem to move from the scene projected onto them—it's almost impossible to hear her story about turkey vultures, and to know why it matters. You have to concentrate pretty hard, too, to detect the intended waterfall effect in Marina Abramovic's Hollywood Squares–like grid of chanting monks.

A show this size can't avoid a few duds—non-starters of corporate blandness or half-baked wonder—but it's a pleasure to see the normally staid Rubin bust out, if only for a while, with some lively contemporary work. Get your karma while it's hot.

What: The Missing Peace: Artists Consider the Dalai Lama

Where and when:
Rubin Museum of Art
150 West 17th Street
Through September 3rd

Museum opens Monday through Saturday 10 a.m. to 6 p.m., and is closed Sunday and federal holidays