New York, USA -- 'The Arts of the Buddha' will be the special theme for Sotheby's sale in September that will present works of the major Far Eastern cultures in India, China and Cambodia. 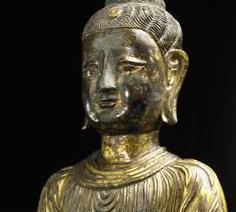 The auction Sep 21 will include physical representations of the divine through different media like paintings, drawings and sculptures.

The cornerstone of the sale is a magnificent 13th century Tibetan gilt bronze Maitreya that is among the most important Himalayan works of art ever to come to auction and is estimated at around $3.5 million.

The art works will be on exhibition beginning Sep 14 and the sale is estimated to bring in between $8.3 million and $11.2 million.

Said Theresa McCullough, senior specialist in charge of the sale: 'The sale celebrates the splendour of Buddhist art and includes three exceptional lots illustrating the transference of ideas and craftsmanship between Tibet and China during the early Ming Dynasty.

'It is unprecedented to have three such works in one sale. Also included in the sale is a private Swiss collection of Himalayan bronzes, a beautiful Yuan Dynasty wooden Avalokitesvara (a Buddhist deity) and two highly rare 15th century Tibetan Sakya Mandalas painted by Newar artists (of medieval Nepal).'

Speaking of the top lot, David Weldon, senior consultant for the sale, said: 'This exceptional statue of Maitreya is the quintessential example of Nepalese artistic influence in Tibet during the 13th century and is evidence of the absolute mastery of the Newar artists. The image of the 'Buddha of the future' is amongst the very finest Buddhist sculptures to have survived from the period... and in such pristine condition.'

The magnificent gilded and bejewelled copper alloy image of Maitreya portrays him as a princely bodhisattva in Tushita Heaven. Maitreya's status in the Buddhist canon is paramount for he embodies the enduring hope for the salvation of all sentient beings.

The bodhisattva personifies the principal Buddhist tenet of compassion, clearly portrayed in Maitreya's divine countenance. The rich gilding of the work is almost entirely intact with a soft sheen and subtle hue. The jewellery is superb, retaining original inset semi-precious stones of fabulous colour.

The Newar sculptural aesthetics of grace and sensuous modelling imbue the statue with serenity, while the Tibetan love for opulence is seen in the depth and variety of colour in the jewels.

A rare and important early Ming kesi thanka dating back to 1416-1435 (China) will also be featured at an estimate of $1 million-$1.5 million. This unique thanka of Chakrasamvara and Vajravarahi engaging in the perfect union of wisdom and compassion served as a device for the visualisation of the Chakrasamvara tantra, literally 'Circle of Bliss'.

The tantra is a secret treatise with its origin in medieval eastern India and is used by practitioners to increase their ability to attain the ultimate goal of enlightenment.

The artistic style and the painstaking weaving technique of the kesi thanka is rooted in the Yuan dynasty. Four such early Ming dynasty silk kesi banners are recorded depicting esoteric tantric deities from the Tibetan pantheon - all, apart from the Chakrasamvara, remain in Tibetan monastery collections.

Another cornerstone for the sale is a rare, imperial painting on silk from China depicting Lohan Chudapanthaka (a Buddhist monk), estimated at $1.5 million-$2 million. The portrait of Chudapanthaka demonstrates a continuum of classical painting style and subject matter that had long been popular in China.

Seated in vajraparyankasana on a rock spread with a floral patterned red and green covering, his hands in meditation position, and he is wearing flowing white and cream garments and a monk's patchwork robe.

The pair to this Chudapanthaka painting depicts the arhat Vajriputra and is now in the Robert Rosenkranz Collection. The pair of paintings, defined by a mastery of restrained elegance and formality, survives from a set of 16-18 paintings, the remaining either lost or unrecorded.