Chinese art, in one man's translation

NEW YORK, USA -- WHEN the exhibition "Inside Out: New Chinese Art" opened at New York City's Asia Society and Public School 1 in 1998, it caused a stir because it both did and did not meet expectations of contemporary art from China. 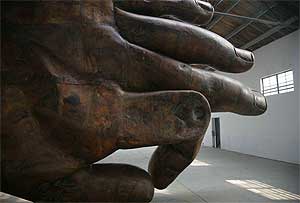 The show had plenty of Mao portraits, but they came with jokes: Mao behind bars, Mao in Pop colours, with beauty marks and a flower in his teeth. There was also calligraphy, but it was messed-up calligraphy: illegible, computerised, used to write nonsense characters, fake language.

Such irreverence was taken as the sign of a cultural revolution that Americans were ready to like, one of brave young artist-dissidents defying a stiflingly imperial past and a repressive Communist present in an effort to breathe free democratic air. That the artists adopted certain Occidental forms to do so oil on canvas, for example only confirmed that the West had won again, bringing light to a benighted world.

But not everything in the show fully supported this view. One photograph in particular looked neither distinctively Western nor Chinese, just strange. It was of a naked man, his head half-shaved, sitting in a prisonlike space. His skin was wet and covered with flies. His face looked blank but tough, as if he were trying to meditate his way through pain.

The picture is of the Chinese artist Zhang Huan, who is now the subject of a terse, forceful midcareer survey at Asia Society. The image documents a solo performance he gave in 1994, when he was 29, in Beijing. For the occasion he slathered himself with fish oil and honey, then sat motionless in a public latrine as insects crawled over him, into his mouth, up his nose. At the end of an hour, he stood up and slowly walked into a nearby pond until the water closed over his head.

By the time of the performance, Zhang, who comes from a farming family in Central China, had been in Beijing for three years. He had earned an art school degree in painting but didn't know what to do next. Slightly older artists, including the Mao portrait painters, had begun to attract Western attention in the wake of the Tiananmen Square protests, though few of them had been directly involved in them. Zhang wasn't part of any of this: He wasn't politically minded, and he wanted to find an alternative to painting.

Out of money, he moved to an area that was little more than a glorified garbage dump on the edge of the city artists living there called it the East Village, after the New York neighbourhood where he listened to Kurt Cobain and grew depressed. But he also made friends with other artists. East Village living was intensely communal; everyone needed everyone else to survive. And it was then, when he had no other resources, that he started to use his own body and the bodies of fellow artists as instruments for art.

His solo performances were sensationally masochistic. He had himself strapped to a board and hung from the ceiling while a medic siphoned off his blood. He locked himself in a metal box with only a slit for air.

Group performances were more benign. For one called "To Raise the Water Level in a Fishpond", he asked 40 migrant labourers to stand in a pond, their physical presence, presumably, altering its volume. For another titled "To Add One Meter to an Anonymous Mountain", he and nine other artists climbed a mountain near Beijing, stripped and lay down on top of one another to create a second, mini-peak.

Zhang's art first became "Chinese" in a way that Westerners might understand the term when he visited the United States in 1998 for a solo performance at New York City's Public School 1. as part of "Inside Out". The piece he did, "Pilgrimage: Wind and Water in New York," was conceived around a central prop: a traditional Chinese bed with blocks of ice in place of a mattress. Accompanied by recorded Tibetan music, he made his way across PS 1's courtyard in a series of Buddhist-style prostrations until he reached the bed. Then he undressed, lay face-down on the ice, and stayed prone for 10 minutes. When he could endure the cold no longer, he sat up, faced his audience, and the piece - part ritual, part ordeal - was over.

Critics, especially in China, have accused e{aac}migre{aac} artists of pandering to Western concepts of Chineseness. And it is easy to see how a performance like this one, with its Orientalist appurtenances , might illustrate their point. But like all of Zhang's best work, "Pilgrimage" skirted pretension by being direct and plain, and by posing questions rather than making statements.

How does a person translate himself from one strong culture to another, it seemed to ask. Can he melt into the new culture or will he be frozen out? Can he relinquish the culture he came from or will he find himself identifying with it more strongly than he had before?

These questions had personal importance for Zhang after he relocated to New York the same year. They are recurrent subjects of the art he made here and are most succinctly addressed in pieces like " " (1998) and "Family Tree" (2000). These pieces are essentially performances for the camera. But while Zhang's body is the main image, the action - and this will become increasingly true - is done by assistants.

For "Family Tree" he asked three Chinese calligraphers to write directly on his face and shaved head until the skin was covered. What they wrote - Chinese folktales, poems, names - was less important than the fact that the ink-brushed characters gradually obscured his features. In the last of the nine sequential photographs, his face is completely black, as if erased by, or completely absorbed into, language.

For "My New York," done for the 2002 Whitney Biennial, dressed in a kind of Incredible Hulk fat suit made from raw meat and set doves loose from cages, a Buddhist gesture of compassion, on the street in front of the Whitney Museum of American Art. With 9/11 just a few months in the past, the effect was fierce and pure, very much of that moment.

His interest in Buddhism, the religion of his childhood, appears to have increased in direct proportion to his discomfort at living in the West. And in 2006 he moved back to China. The timing was good. Chinese art is now a boom industry unimaginable a decade earlier. Certain artists - he is one - enjoy rock star fame there. In his early 40s, he has stopped performing and has opened a huge studio in Shanghai, where he oversees a platoon of assistants in the production of an object-based art.

Factory-style art making is nothing new to China or to the West. Nor is it as great a departure from Zhang's earlier career as it might seem. His art has always been collaborative; even the solo performances relied on helpers and photographers. He has often served as a passive center from which ideas generated. Some of his new sculptures have the simplicity and suggestiveness that made the early performances memorable.

And the body is still there. Among the new works are giant copper hands and feet, magnified versions of fragments of broken Buddhist figures that Zhang found in Tibet. The show's largest piece is a colossal head, combining features of the Buddha with the artist's self-portrait, moulded from incense ash collected from Buddhist temples.

The sculptures are being introduced to New York in the exhibition, organised by Melissa Chiu, director of the Asia Society Museum. But we may well see more of them soon, since Zhang recently joined PaceWildenstein's blue-chip stable. Whether he'll stay in it remains to be seen. He has bolted from several other gallery commitments in the past. He's not the stable type.