Mueller's new ones have a Buddhist calm about them

Stephen Mueller's new paintings may not be a replacement for yoga class, but they do aim to instill some peace of mind.

Culver City, CA (USA) -- THE mandala-like works in "Stephen Mueller: New Paintings" may not be a replacement for yoga class, but they do aim to instill some peace of mind. 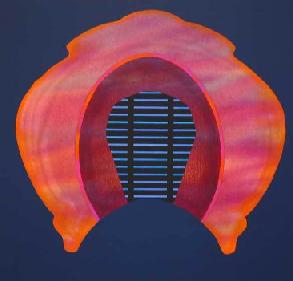 After a 15-year hiatus from the L.A. scene, the New York-based Mueller is returning with a series of images that riff on the Tibetan religious paintings called thangka. Although Mueller does not feature beatifically smiling Buddhas floating on lotus flowers, he does juxtapose crisply rendered abstract forms against soft-focus backgrounds.

"The imagery is derived from Eastern iconography," Mueller said. "Tibetan thangka painting . . . was only a starting point. I've always been interested in Japanese prints, Persian miniatures and Indian tantra painting. So this is all of those things put together with a little bit of a Pop sensibility."

Although Mueller is Buddhist, he considers his work to be less religious imagery than "personal puzzle." The paintings double as optical illusions: At first, 3-D shapes pop out of the blurry background, but a closer look reveals the canvas to be, well, just a canvas. "My intention is to make a meditative device to bring the viewer back to the present," Mueller said.