On the Roads of China, the Buddha Was Transformed

New York, USA -- What an outlandish sight Buddhist monks must have been when they first turned up more than a millennium ago in China, a land where only criminals — the disgraced and the dangerous — had shaved heads, wore patched-together clothes and begged for food. 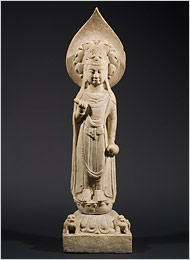 Traveling the Silk Road alone or in pairs, monks had neither homes nor families. This too must have disturbed a Confucian culture that was based on the idea that where you came from was who you were, and that the meaning of life lay in family, in placating ancestors and in producing heirs. Now, suddenly, here were these foreigners from India and Central Asia at their doors, some looking like newborns, trusting and smiling, as they held out their empty bowls.

You’ll see variations on this look many times in the dozens of small stone sculptures gathered at the China Institute Gallery this fall, most of them of the Buddha himself. Of course, we’re used to this look. To us it’s a classic, even clichéd emblem of spiritual serenity. To the Chinese, though, it must have seemed every bit as bizarre as the monks who introduced it. Only gradually did it become accepted, then revered, then invested with magical power.

That power lingers in China still, through Buddhist sculptures being recovered by archaeologists. And it is humming away at the China Institute in “Buddhist Sculpture From China: Selections From the Xi’an Beilin Museum,” a superlative exhibition with a longish history.

The show was proposed a decade ago by Annette L. Juliano, professor of Asian art history at Rutgers University, to bring little-seen Buddhist sculptures from one of China’s best-known provincial museums to the United States. The China Institute put it on its 2001 schedule, then for some reason took it off. In 2003 the gallery’s director, Willow Weilan Hai Chang, visited the Beilin and revived the project.

The delay had some benefits. Digging that went on in and around the ancient imperial city of Xi’an after 2001 brought fresh sculptures to light. And the addition of a few of these to Ms. Juliano’s selection of 60 objects updates the show, archaeologically speaking. It also enriches the picture of Buddhist sculpture’s underestimated diversity as it absorbed influences, major and minor and constantly reshaped itself during four centuries of cultural and political change in China.

Many exhibitions of such art cater to Westerners’ hunger for imperial polish, but much of the material here originated outside of courts and temple settings. Small, sometimes plain, even rudimentary, most of the statues were carved for modest shrines or for homes, either on commission or on the production line.

The earliest piece, an expertly finished sandstone stele of the meditating Buddha dated 462 A.D., retains some of the sweet, yielding organicism of contemporaneous Indian art. But within a few decades into the Northern Wei period (386-534 A.D.), this model undergoes alteration. The limbs are stretched, the body flattened, the face squared off, the faint smile replaced, as often as not, by an emphatic grin.

To say the change seen during the four centuries covered by the show is a shift from naturalism to abstraction is to grossly oversimplify history. Still, the interplay between these modes has helped provide a language for defining styles. Using this scheme, we move from the linearity of Northern Wei through the complicated, styles-within-styles mix of the Northern Zhou era (557-581), on which Ms. Juliano’s catalog concentrates, to the curvaceous sway of Tang figures like the eighth-century white marble bodhisattva, headless but otherwise as perfect as any Apollo, unearthed from a Xi’an palace.

But what makes the show especially stimulating is the abundance of images that confuse, contradict or entirely depart from accepted art historical categories or classical notions of beauty.

A fold in the robe of a little Northern Wei Buddha, for example, looks like coils of rope that bind him, ankle to neck, so tightly they make him wince. Ms. Juliano notes how unlike this figure is from almost anything else known from the time. Could he be a forgery? A freak of provincial style? Could anyone ever have found him beautiful? Apparently no one does now — unearthed more than 30 years ago, he had been in Beilin Museum storage until this show.

Then there are Buddhas with Bart Simpson haircuts and Mr. Spock ears. One, with an egg-shaped face and undersized body, has holes drilled in his forehead and neck, purpose unknown. And what about a figure who looks like the Buddha but may be a Daoist sage? He scowls with vexation, as if even he were puzzled about his identity.

The Tang material at the end of the show brings yet another mystery: a squat, bald figure as chubby and mild-featured as a baby. Ms. Juliano speculates that he could be a dwarf but calls him a monk, though whether he is rapt in meditation or napping after a hefty meal is a question. Either way, he hardly conforms to our ideal of the abstemious, self-disciplined ascetic.

He is one of the many images in the show that challenge our aesthetic expectations and our scholarly need to explain, classify and make familiar. Like the Chinese seeing the first monks coming off of the Silk Road, we know little or nothing about the history of these figures, where exactly they came from and why they look and act as they do.

With this show, we have a chance to get to know them, ask questions of them, look at them, and look again. Their version of beauty won’t change with time, but our beholding eyes might.