Art casualties from Tibet to Cambodia find an eager market

New York, USA -- One thing art market actors cannot be accused of is being squeamish. If anyone should harbor any doubts on that score, the auctions of "Indian & South-East Asian Art" held on March 19 at Sotheby's and March 21 at Christie's will have dispelled them. 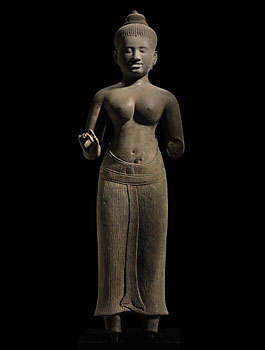 << An 11th-century Khmer statue in the Baphuon style that fetched $2.11 million at Christie's.

The title did not really do justice to the contents of the sales. Indeed, the gilt bronze Buddhist figures that each auction house ran on the glossy covers of their catalogues indicated that the thrust was not on India, nor even Southeast Asia, but Tibet. Nepal and Cambodia were also represented by outstanding works that did not qualify as Indian either.

By one of those ironies of fate, the Tibetan uprising broke out that week, stirring up memories of the massive destructions during the Chinese Cultural Revolution that swept away major architectural masterpieces in Tibet such as the 15th-century Densatil monastery and dispersed thousands of religious ritual works of art kept in monasteries. But if professionals had passing qualms at the thought that the untoward turmoil might compromise their commercial endeavors, they need not have worried. On March 19, Tibetan art did splendidly.

Sotheby's star lot, which was also the most problematic because of its ambitious estimate ($1.5 million to $2.5 million plus the sale charge) sold against the reserve for $1,385,000, still a large price for this 15th-century gilt copper figure of the seated Buddha. The head and neck were repeatedly painted until recent times, in keeping with Buddhist ritual tradition. Hence a sweet, mealy-mouthed expression, not exactly popular with most collectors.

The catalogue, however, pointed out "the pristine condition of the statue, with its gilding almost entirely intact" and assured that this "clearly indicates its highly regarded Tibetan status, where [sic] it is likely to have been placed in an exalted temple location out of danger of accidental damage or handling by devotees." Sadly, it was not out of danger of incidental removal. Were bidders encouraged by its provenance, the Berti Aschmann Collection which it had entered, the catalogue said, in 1961? Possibly. The fear of looting committed a long time ago is somehow not as nagging as that of more recent pilfering.

Actually, such fears, which are plausible in the case of magnificent bronzes tumbling onto the market without any reference to provenance or previous publication, did not affect the sale of some of the most important pieces seen at Sotheby's.

A group of 15th-century gilt bronze seated figures purporting to portray four historical lamas thus sprang up out of the blue. Cast at the same period as part of some set, they were in strikingly good condition and the Tibetan inscriptions incised on the pedestals named the lamas. Two of these, from the Sakya order, lived in the 13th and 14th centuries. Shang Koenchog Pel, born around 1250, was highly regarded by Kubilai Khan (1215-1294), the descendant of Gengis Khan and founder of the Mongol dynasty that ruled China from 1271 to 1368. Pel established the Sakya practice of Tantric Buddhist teaching which he passed on to his disciple Choje Draphupa Sonam Pel (1277-1346). The disciple's portrait is a gilt bronze figure of precisely the same dimension, 32 centimeters, or 12 5/8 inches, high, as the master's likeness, clearly made as a match.

Objects of veneration in the monastery they once belonged to, the two portraits respectively sold for $205,000 and $217,000, far above their estimates.

Yet, through one of those auction quirks that often affect the art of complex cultures understood by few in the Western world because the essential keys provided by their language makes them impenetrable, the next two portraits did not sell. Both immortalized the memory of Gyaltshap Kunga Wangchuk (1424-1478), the fourth abbot of the Sakya order in a famous religious center, the Ngor monastery, and both were signed by the sculptor, Tsugtor. The stiff estimates, $200,000 to $300,000, may have acted as deterrents.

Rarest of all, a large bronze bodhisattva of the 11th century bore a connection to another bodhisattva found in the rubble of the Sakya shrine at Piyang, not far from the border separating Chinese-held Tibet from the Tibetan areas incorporated with India. No provenance was given here either. Was that also rescued from the ruins of the Piyang shrine? The "Asian Private" buyer, as Sotheby's release put it, who paid the $181,000 that the 11th-century bronze cost, will have to work that out.

Earlier in the sale, works of art from another Buddhist land devastated by 20th-century events, likewise offered without a provenance, made one wonder how it is that so few questions are asked about just how works of art of major importance, for which no government would ever issue an export license, come to tumble on to the market.

Do the temples of Cambodia, erected by the Khmers at the height of their culture between the 10th and 13th centuries, ring so few bells? The admirable sandstone figure of a woman carved in the 11th century in the style known from Banteay Srei and described as having been acquired in 1986 was missing its head, very neatly chopped off, and both feet. It looked suspiciously like those sculptures broken off in situ. However, that did not harm its commercial performance. It ascended to $361,000, nearly six times the estimate.

Next came a 12th-century bronze bodhisattva from the Angkor period. No provenance at all here, no date of acquisition. The 34 centimeter four-armed statue did not sell as easily. Whether this was due to the high estimate, $80,000 to $120,000, plus the sale charge, or to angst caused by the fear of possible problems in some distant future, when perhaps proof of precise provenance will have to be produced for transactions to proceed legitimately, is hard to tell. Even so, it brought $73,000.

The next piece, a 13th-century bronze figure of Ganesha seated on a pedestal cast in the Bayon style of Angkor Wat, happily exceeded its high estimate by half, climbing to $52,000. Here, the catalogue noted "Provenance. Hong Kong Collection, 1980s," implying that it passed through the Hong Kong trade in those years. Some "provenance."

And that is the story of the entire art market handling sculpture or objects dug up in Tibet, Nepal, Cambodia, Indonesia or even India, but less so in the latter case. India, now more powerful, has been able to tighten the screws on illicit digging.

Two days later, at Christie's, things differed only in nuances. A Khmer statue of the 11th century in the Baphuon style had surfaced in the market in 1968, two years before the Unesco cut-off line of 1970, after which goods of uncertain provenance are deemed less kosher. At $2.11 million, it now holds the world record for Khmer sculpture. How nice!

Tibet contributed a fantastic gilt bronze figure of Avalokiteshvara cast in the 14th century and said to have been in Tokyo by the mid-1960s. It went for just over $1 million.

Another Avalokiteshvara, cast in the 9th century, did not have that luck. Despite the proportions reminiscent of the Srivijaya culture in Sri Lanka, the facial features point to a Cham origin. The mysterious Cham people who survive in communities scattered across Vietnam and Cambodia adhered to Hinduism and Buddhism in circumstances that elude us and later turned to Islam, when it reached the Vietnamese coast via the maritime route around the 11-12th century. Their distinctive art points to a strong collective personality. More might be learned about them if excavations were conducted. That is not going to happen. Few are concerned about the vanished culture of a minority on its way out.

With every major work projected onto the market by commercial digging, a portion of its past history is lost forever. The rare Cham bronze which, Christie's assured, came from a "Private English Collection [in the] 1990s" actually failed to sell as the hammer came down at $95,000. Thus was historical waste accompanied by commercial failure. From Tibet to Cambodia, the common treasure of mankind is squandered at a rate that matches that of melting Antarctica. And business goes on.