Wilmette, IL (USA) -- Fortunately for museums and collectors, the Chinese Cultural Revolution didn't destroy all of the furniture, art and artifacts created over hundreds of years in Tibet. 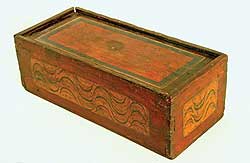 Because of its remoteness, it wasn't till the Chinese invasion of Tibet in 1959 that the world became aware of the many Buddhist ritual and ceremonial objects and that culture. The monks and others who fled brought their most treasured possessions; first into India then to the West. Many that found their way to London dated as early as the 12th century.

Specialist dealers Paul Morse and Tom Arsenault of Ipswich, Mass. made their first visit to Kathmandu 20 years ago bringing back small pieces such as colorful painted boxes and later brightly painted cabinets. Many pieces had been destroyed by the invading Chinese.

"We continue to go back every year, but the market has practically dried up," Morse told me. "Furniture is rare since the population has always been small and not much was used in their homes." The earliest examples were tables and covered storage boxes. By the 19th century, cabinets were being made. They were mostly of pine.

It was the monks who were the Tibetan artists, developing the style revolving around Buddha and their deities. Small paintings called Tsakli focused on religions and still come to market.

"Collectors like the miniature Tsakli paintings that are usually done in large, related sets. Until recently they were all hand-painted on handmade paper, or occasionally cloth," Morse said. He also pointed out that almost all came out of Buddhist monasteries where they had several uses, such as instructionally and as stand-ins for deities or ritual objects. Prices can range from $25 to $250 depending on age, condition and the quality of art.

The finely made sculptures were often commissioned by wealthy Tibetans and made by craftsmen trained in the metalworking tradition of Nepal and China. They were made of precious metals such as gold and adorned with stones of carved turquoise and lapis lazuli.

As Morse pointed out, reproductions and reworked boxes and furniture abound. Most of the fakes and reproductions come from China. Suspect cabinets with decorated sides and tops. Since the pieces were made to sit side by side in the monastery, they weren't painted.

Though this is a relatively new field for collectors, back in the 1960s copies of 15th-century Tonka's (paintings of a central deity surrounded by symbols) were made for export. Many were passed off as old.