Dhammapada and Other Works

Colombo, Sri Lanka -- “Dhammapada and Other Works”- An exhibition of Paintings and Installations by Chandraguptha Thenuwara was inaugurated at the Lionel Wendt Gallery in Colombo on 23rd July 2008. 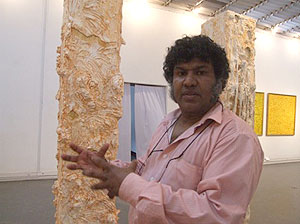 It was organised to ‘Commemoration of the Un-Commemorative Julys’. Being an anti-war artist, Chandraguptha Thenuwara has sought to remind his fellow Sri Lankans of Lord Buddha’s teachings about tolerance and peace.

The exhibition will remain open till 29th July 2008 from 10am-7pm. Chandraguptha Thenuwara is a senior lecturer at the University of Visual Arts in Colombo. He is also the Director of Vibhavi-Academy of Fine Arts, which was founded in 1993.

From childhood we are never allowed to forget that we live in a dharma-dveepa (an island of righteousness).  The full force of modern communication technology and the education system are both harnessed to this ‘fact’. Even if we don’t awaken to the sound of the bells in the nearby Buddhist temple, we open our eyes to a world in which there is some Buddhist preaching going on, on the radio or on television. Moreover, we live with the confidence that Buddhism is safe in our island, protected even by our Constitution.

Our culture is always described as a ‘Buddhist’ culture. Politicians remind us of this whenever they have the occasion to do so. Saying that ordinary politicians were abusing both the religion and the people by making false references to Buddhism, the most precious Sangha was escorted ceremoniously into that most hallowed shrine of politicians, the Parliament, and are now firmly ensconced there through the ballot of the people. The people know all this very well.

Most venerable statues of the Lord Buddha are to be seen coming up at every junction.  Residents of some areas have become so holy that when they are helpless in the face of a garbage heap, they erect a Buddha statue in that place, and erase the garbage dump forever.

Each year since 1983, the month of July has dawned as no ordinary month. July acquired a new meaning as a marker of terrorism and militarism by spreading a stain of shame that we cannot wash away even today. On July 23, 1983, 13 soldiers were killed in the north.  An attempt was made to play politics with their bodies, which were brought to Colombo. Because of this, a massacre of Tamils took place. Since ‘Black July’, since that day, July 25, 1983, the rate of destruction of human lives has grown rapidly. Thousands of politicians, soldiers and other professionals, so-called Liberation Tigers and all those who are labeled as opponents have been brutally murdered using a hundred and one justifications.  Today, these deaths are reduced to a ‘News Alert’ SMS or a ‘Breaking News’ story.

The cycle of assassination that began with the killing of Alfred Duraiappah in Jaffna on July 25, 1975, moves ever forward. While they are in power, no politician accepts that there are specific issues that are based on ethnicity. While in power politicians turn a deaf ear to whatever is being forcefully brought to their attention in a democratic manner.  When there seemed to be no further room for democratic manoeuvre, the young took up arms on behalf of those who confronted the issues. At one time, they were Sinhalese. At another time, they were Tamil. The armed Sinhalese were repressed. Perhaps this could be done because the majority of the rulers were Sinhalese themselves. The consequences occasionally still rear their heads, although they do not any longer bear arms. The educated young Tamils who have taken up arms have grown to the point that they cannot be repressed.  For years now we have heard those who declare, at times loudly and at other times softly,  that those who take up arms can be destroyed by arms, as if to fool themselves. Yet each time, it is the words of the Buddha that have been proven to be true. That is, that those who take up arms will perish by arms. Those who are crazy with racism and militarism boast that they can defeat the enemy.  In order to hide the fact that soldiers who bear arms are also dying, they say that they have sacrificed their lives. In the same way, in the terrorist operations arena, those who kill themselves and kill others also become heroes who have sacrificed their lives. While they race on in the spirit of self-sacrifice, they also compel innocent civilians to sacrifice their lives.

The question is not being resolved. Rather, it is becoming worse by the day. There is no end to the bomb explosions. Neither does there seem to be an end to the operations to save the country. After each operation we hear repeated State appeals, calling on us to sacrifice our lives for the sake of our country. We see the same images again and again on posters and billboards, and in advertisements. Time flows on. Politicians work hard to drive the scoreboard of the rate of dying ever higher.

On our dharma-dveepa, no death can take place that is not a natural death. Why do we say so? Because most Sri Lankans are Buddhist, who promise, in the first of the five precepts of Buddhism that they will refrain from taking life. But what actually happens?  This island which the Buddha visited three times, became formally Buddhist after the arrival of Arhat Mahinda on our shores. From that day onwards, the preaching of the dharma became official.

Rivers of blood will continue on our earth, on this land that is the like our Holy Land according to the sacred teachings of the Buddha, until we eradicate terrorism and militarism. It is only we who can call a halt to this.  All politics can do is fan the flames again and again, and drag our people and our country further into sacrifices of more and more blood. It is clear by now that they are not capable of doing anything. We should not allow the Buddha’s preachings, which are two thousand five hundred years in our land, to remain in camouflage.

Let us once more listen to what the Buddha preached, with consciousness, free of the shadows of race and caste and politics. If we were to at least pay attention to these three verses of the Dhammapada, and if we were to strive to put them into action, we will be able to honour these human forms that we have attained through much exertion and we will be able to bring about peace to our island.

The three key paintings in this exhibition are three verses of the Dhammapada that are hidden, as if they are yet to be heard.

The Dhammapada constitute the footsteps of Buddhist philosophy, as they are the path of the teachings of the Buddha.  Those who travel on the path of the dharma, are those who are suited to attain nirvana. The dharma that was preached by the Buddha is based on material fact.  Therefore, there is always a practical meaning to his teachings. The text that accompanies the Dhammapada, the Dhammapadattha-katha contains the description of each verse and sets out the fact on which the verse is based and the person for whom it is intended.  The Dhammapada was preached in order to help human beings better understand the problems they face in life, to bring them relief and to guide them on the path to Nirvana.