Emory, Georgia (USA) -- On the road with a camera and a keen eye for natural beauty, Brook Reynolds scours the southern landscape for forests of bamboo — and that perfect shot. 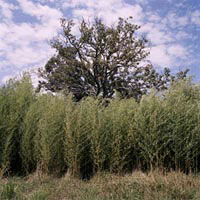 The result is the Emory alum’s first solo exhibition, Breath of Bamboo, which is being housed at the Callanwolde Fine Arts Center through Halloween Day. The 23 chromogenic prints, influenced by Zen Buddhism, appear to capture the grace and dynamism of the wooded landscapes of Japan, China and Vietnam.

But in fact, they’re the results of road-side scavenges throughout Georgia, South Carolina and North Carolina.

These local photographs are the highlights from Reynold’s larger thesis project, completed with distinction a year ago from the University of Georgia, and combine Reynolds’ practice of Zen Buddhism with her sincere appreciation for chaotic beauty throughout nature.

Despite the photographs containing the same basic subject — bamboo ­— the focus and composition are startlingly varied.

“Like the breath, the experience of bamboo in these photographs can be peaceful and intentional, but it can also be dynamic and chaotic,” Reynolds explains.

The bamboo imagery directly relates to the photographer’s practice of Zen, one of the more elegantly simplistic branches of Buddhism. The spiritual significance of the plant, which grows extensively throughout the Southeast, is due to its hollowness.

Buddhists believe that we, like stalks of bamboo, are empty. Often misinterpreted as nihilistic, Buddhism does not claim that things do not exist; rather, that they do not exist as independent realities, as it is generally assumed. Things lack an inherent reality; people, animals, objects are empty of any real being. Through meditation, insight into this emptiness brings wisdom and sought-after inner peace.

Alluding to emptiness, images of hollow circles are a striking, running motif throughout Reynolds’ work. “Three Marks of Existence” looks down on three hollow shoots peeping through dried leaves; “Emptiness” peers past stalks that have fallen before a circular concrete drain, through which we can see a circle of light.

This juxtaposition of manmade items alongside the natural is just one of the prominent contrasts that pervade the photographs. Reynolds also effectively contrasts life and death, Buddhist and Christian imagery, and control with chaos, bringing subtle conflict to the largely sublime pieces.

One of the exhibition’s highlights, “The Eightfold Path,” exercises the natural-versus-manmade contrast to particular effect: an iron gate foregrounds bamboo stalks, the rusting, mossy bars making it hard to differentiate between the gate and the natural bamboo.

Developing this theme, stead-fast bamboo grows through a pile of debris in “The Gateless Gate,” showing nature’s structure and man’s lack of it.

Using images of life and death and man alongside nature suggest key Buddhist beliefs: the impermanence and interconnectedness of life. Bamboo ­­— some varieties of which can grow up to a meter a day ­— is an ideal symbol for this determination and efficiency of nature.

In Buddhism, interconnectedness and regeneration are typically represented by an “enso” sign: a circular Japanese character, reminiscent of the hollow bamboo stalk.

The enso is a recurring image, and Zen, which Reynolds considers less a philosophy and more a religion, informs all of the photographer’s work. Another collection, simply entitled Enso, combines slow exposures, motion and natural objects to create striking, white circular images upon black.

The effect of these bold images is both calmness and curiosity, which can also be said for the Breath of Bamboo collection at the Callanwolde. A thoroughly well organized exhibit, the splashes of pink, crisp browns and warm greens cohere the collection superbly.

Reynolds’ exhibit is part of “Atlanta Celebrates Photography” ­— a month-long succession of exhibitions appreciating Atlanta’s photography community. It might, instead, be apt to enter the collection in a “Photography Celebrates Atlanta” exhibit; Reynolds’ keen eye allows a beautifully didactic collection and a deep appreciation for our local — and often hidden ­— Southeastern landscape.