LONDON, UK -- The V&A will open The Robert H. N. Ho Family Foundation Gallery in April, the first gallery for Buddhist sculpture in the UK. 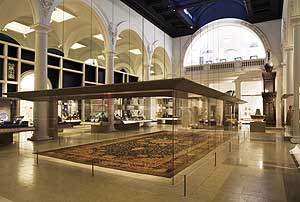 The new day-lit gallery will display highlights from the V&A’s world class collection of Buddhist sculpture ranging from monumental Chinese temple sculptures to tiny portable gilded Buddhas. On display for the first time will be an early surviving image of the meditating Buddha (c.300 AD) from North West India and a 17th-century gilded figure of the saviouress Tara from Nepal.

Around 50 sculptures created by master craftsmen between AD 200 and 1850 will be shown in the new gallery to explore how the Buddha has been represented in Asian art. The Gallery will tell the story of the life of the Buddha and the spread of Buddhism from India to the other regions of Asia. The sculptures will be arranged in geographic groupings demonstrating the diversity of artistic expression throughout Asia and will reflect the differing Buddhist practices of India, Sri Lanka, the Himalayas, Burma, Java, Thailand, China and Japan.

The new displays will include a majestic gilded copper figure of Bodhisattva Padmapani from Nepal, richly decorated with precious stones, and an 18th-century monumental gilt bronze seated Buddha from Tibet. Stone and metal Buddhist images from India and the Himalayas will be shown alongside recently restored 19th-century oil paintings which record the famous 5th-century murals in the rock-cut Buddhist monasteries of Ajanta in central India.

Life-size replicas of the sculptural reliefs from the 8th-century Javanese Buddhist temple of Borobudur will also be on display.A section focussing on East Asia will include a powerful 7th-century marble torso of the Buddha from Tang dynasty China and the head of a monumental Buddha once carved directly into the rock face of a 6th-century cave temple complex at Xiangtangshan, northern China. The Japanese Buddhist sculptural tradition will be represented by an 18th-century standing bronze figure of Fudo, the protector of religion.

The spectacular three metre high Mandalay Shrine, a rare surviving piece from the now destroyed royal palace at Mandalay in Burma, will go on display in the Museum for the first time. This wood and lacquer shrine will be shown complete with its ensemble of offering vessels, attendant figures and manuscript case. Based on Burmese royal thrones of the period, the shrine demonstrates the close relationship between beliefs in the spiritual rule of the Buddha and that of the Burmese king’s semi divine status.

The gallery has been made possible by a generous lead donation from the Robert H. N. Ho Family Foundation and a grant of £300,000 from the DCMS/Wolfson Museum and Galleries Improvement Fund.

The Robert H. N. Ho Family Foundation Gallery is part of the V&A’s FuturePlan to transform the museum through new galleries and beautiful redisplays of its collections. The Gallery will include an interactive display to explain the meaning of the hand gestures and poses used in Buddhist sculpture. There will also be two films; one will look at the ancient Buddhist monasteries of Ajanta in central India and Tabo in Tibet; the other will show the living traditions of contemporary Buddhist practice in the Indian Himalayas.