The Sacred Arts of Bhutan at the Asian Art Museum 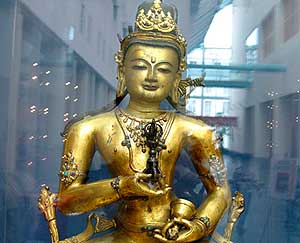 While the Asian Art Museum's showcase of "The Dragon's Gift: The Sacred Arts of Bhutan," which opened on Friday and runs through May 10, meets such expectations, its greater value lies in challenging Western stereotypes with dynamic, often shocking depictions of the central Buddhist precept of non-duality. Simply put, all is one.

This notion of universal interconnectedness may be first observed in the behavior of the sojourning Bhutanese monks, who daily bless the art objects with solemn rituals that combine earthy chants and drumming with clangorous cymbals.

The intention is to jolt spectators from their passive outsider roles into direct communion with the sculptures, paintings, and tapestries on display. More than mere representations, the pieces are seen as living beings, embodying the essence of the deities and saints depicted. Prayer wheels also aim to animate things typically viewed as inanimate. When spun, they are said to release into the world the printed invocations rolled up inside of them.

To the Bhutanese, such words and images live and breathe, guiding all sentient beings toward mindfulness in every waking moment.

Of course, the path toward enlightenment isn't an easy one. Facing existential truth head-on means coming to terms with our often black-or-white views of life and death, peace and violence, spirituality and sexuality. Many of the exhibit's most powerful paintings attempt to reconcile such perceived paradoxes by showing that there is no disconnect.

Strange as it may seem, the Bosch-like scenes of savage beast-humans, multilimbed monsters, crushed bodies, hell fire, and necklaces of severed heads serve as keys to the kingdom of transcendence.

One overcomes death by acknowledging its omnipresence. Serenity is the realization that ally and enemy are always the self. Compassion and passion are one and the same.

A number of tiny sculptures also illustrate this big-picture message. "Seated Manjusri," the Bodhisattva (or teacher) of Wisdom, shows that supreme knowledge cannot be found in books alone. The struggle for insight comes from action: by first admitting one's own limitations, then fighting the good fight, shredding ignorance with the upraised sword of clear thinking. The objective? To see everything as it truly is.

"Usnisavijaya," one of the three Deities of Longevity, takes on life's so-called problems with an eight-armed, triple-headed attack. Dealing with difficulties from many angles leads to the recognition that all obstacles to peace of mind are inseparable from the unobstructed path, so we might as well enjoy the here and now.