Boston, MA (USA) -- For most Westerners, knowledge of the Buddha doesn’t extend beyond a few groovy aphorisms and dime-store statuettes of a fat, smiling monk. 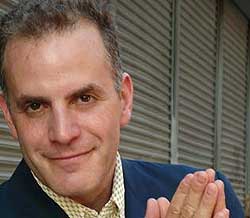 << ‘Getting to know and learn the Buddha’s life has been this process of getting deeper and deeper.’ - Evan Brenner

But one Westerner, actor Evan Brenner, is out to tell the full story. Brenner is currently performing his one-man show “The Buddha - In His Own Words,” at the Boston Center for the Arts before moving the production to the Cambridge YMCA.

Speaking from his New York City apartment, Brenner explained that the Buddha - also known as Siddhartha Gautama, an Indian nobleman who abandoned his life of privilege to find enlightenment - was just as human as the rest of us.

Herald: When did you first become interested in Buddhism?

Brenner: In high school. It promised a way out of my own suffering. And then, about five years ago, I was in a very dark period of my life. I turned back to the Buddhist sutras. . . . At that time, I wasn’t so much drawn to the doctrine as I was to the story of the man. He, too, had gone through tremendous hardships, and I identified with his story. It became apparent to me that his journey was mine, that his journey is all our journeys.

What made you decide to tell the Buddha’s story onstage?

I had immersed myself in these sutras, and they were just full of really great, compelling stories. I was reading the story of Angulimala (about a serial murderer who converts to Buddhism), and I went to my girlfriend and I said, “You’ve got to hear this.” And she kind of oohed and aahed at all the right times.

At that moment I thought, “Wow.” The life of the Buddha is one of the great archetypal adventure stories. I’d seen Alec McCowan do “St. Mark’s Gospel,” where he basically just recites the Gospel of Mark onstage. And I thought, why not do the Buddha’s story as a one-man play?

How has working on the piece affected you?

Getting to know and learn the Buddha’s life has been this process of getting deeper and deeper. To memorize this whole text kind of gets it inside myself, so to speak.

What do you hope that audiences will get out of watching the play?

When I was first curled up with those sutras I thought, “Wow, I would love to see this as a show.” I would like to imagine what it would be like to meet the Buddha face-to-face. It’s sort of deflating in a way, but it’s also great. Because if he was just a human being, it elevates the tradition in the sense that liberation is possible for us all. So I hope for people to have that opportunity.